Our EU membership is the antidote to racism 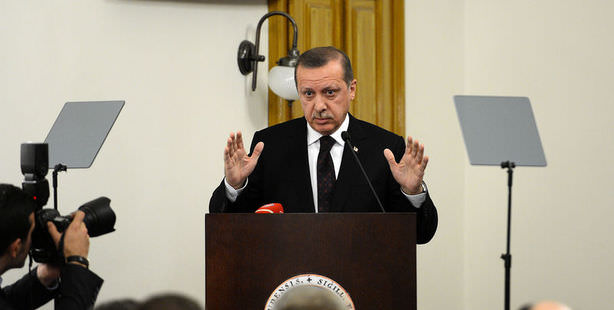 Prime Minister Tayyip Erdoğan addressed an audience of students, academics and foreign mission chiefs at the well-established Elte University in the Hungarian capital of Budapest.

During his speech entitled "Understanding Turkish Foreign Policy and the Global Perspective," Erdoğan said that Turkey never intended to be a burden on the EU; instead they want to lighten their burdens. The Prime Minister also said, "Turkey's membership would be an antidote to racism."

"I would like to emphasize how valuable the support is that Hungary offers our country during the EU negotiations process. However, it is not possible to say that Hungary's constructive approach is shared throughout the EU. Loyalty is one of the first vows made in the EU's basic principles. In other words, it is a pacta sunt servanda. Unfortunately, this pact of loyalty has been trodden upon by certain leaders who have presented new conditions for Turkey, while already engaged in the negotiations process."

THERE IS NO SUCH STATE AS CYPRUS

"Southern Cyprus was accepted into the EU based on an ideological approach. First of all Southern Cyprus is not a state it is an administration. How is it that you can present a member such as Cyprus when there are still UN security forces there?

Europe is dealing with serious issues. For example, the global economic crisis has seriously affected Europe.

The European vision and horizon have become frayed due to recent approaches. In the same manner, the newly resurfacing racism, intolerance and violence in certain European nations continues to send out signs of danger.

At this time, Turkey's membership would undoubtedly strengthen Europe. We are not coming to be a burden, we are actually coming to lift that burden, however the EU does not yet comprehend this.

We support the alliance of civilizations and not their clash. War is easy; it is peace that is difficult.
The most significant factor that threatens peace is poverty and being outcast. In order to eradicate this we need the prosperous petroleum owners to extend a helping hand. To become blind to one's conscience will be the end of any solidarity. The most significant threat the world faces is not global warning or pollution. Injustice is a much greater global threat," stated Erdoğan.