U.S. prepares to charge the DHKP/C for embassy bombing 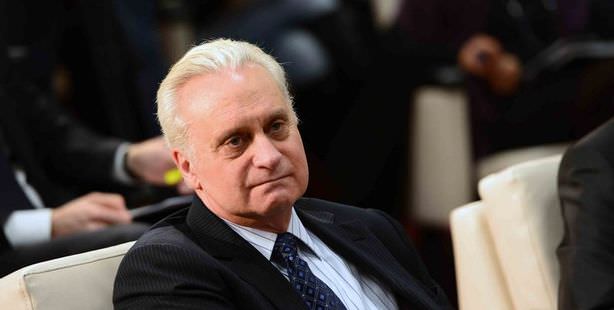 The U.S. Ambassador to Ankara says that the far-left terrorist organization DHKP-C attacked the American system, and said that the U.S. Justice Department may pursue them. “We need to work together to find evidence that will hold up in U.S. courts,” states Ricciardone.

U.S. Ambassador to Ankara Francis Ricciardone hosted Ankara correspondents at his residence in the capital in order to discuss the recent suicide bombing at the embassy in Ankara. Said to be a member of the Revolutionary People's Liberation Party-Front (DHKP-C), a far-left group which is virulently anti-U.S. and anti-NATO and is listed as a terrorist organization by Washington, a suicide bomber detonated an explosive at an entrance to the U.S. Embassy in Ankara killing himself and a Turkish security guard and severely wounding a well-known Turkish journalist. "This was an attack against the American system," stated Ricciardone, explaining that the FBI is now involved in seeking evidence in the investigation that will be brought to court by the United States Department of Justice.

The following are a series of headlines from the Ambassador's address:

THE NUMBER ONE ISSUE: "The number one issue between Turkey and the United States right now is the attack on the U.S. Embassy in Ankara. The heroic Turkish security guard protected us all and we are forever grateful. We have been offered great support by everyone, from the people on the street all the way up to the summit of the state. This is extremely important for us. We have engaged in high-level cooperation since the attack and we are determined to coordinate efforts in any way in order to defeat this common enemy."

WE DO NOT SEE ANY VULNERABILITIES OR ANYTHING LACKING: "We always try to learn something from terrorist attacks. We consider what we and our allies could have done to prevent this. It is not a blame game. No one is looking for any vulnerabilities and no one is being blamed. Turkish officials had warned us that the DHKP/C was active again. There wasn't a specific warning pertaining to a single individual. We do not see any errors or anything lacking in this situation."

THE FBI INVESTIGATING THE DHKP-C: "FBI teams arrived to Turkey and were on the ground within 48 hours of the blast. The FBI has advanced investigative techniques as do the specialists in the Turkish police force. We are hoping to work together in order to further advance in the investigation. There are U.S. institutions that have the authority to persecute conspirators beyond American borders. With this attack, the DHKP-C has put themselves up against the U.S. Justice Department; they have committed this crime against the American system. We are hoping to increase international support against this organization and will begin working with other countries in addition to Turkey. According to our law, if we can find evidence that will hold up in court, then we will have the right to file a case against the terrorist organization. Once forensics experts from the FBI and Turkey find evidence that will hold up in court, a case will be filed against the DHKP/C."

A MESSAGE TO EUROPE: "The DHKP/C is on the U.S. list of terrorist groups. They are trying to stay afloat by taking advantage of the liberties in Europe. We need to compile evidence that will be able to hold up in any advanced democratic nation's courts."

WHY IS A COMMANDER IN PRISON?: "Your own leader touched upon the mishaps in the judicial system in Turkey. There are deputies who have been detained for a long time now. What they are being charged with isn't even clear. There are military leaders that have been put in prison as if they were terrorists. Professors and the former Higher Education Board Chairman are also being detained. They face unclear accusations which span back to 16 years ago. There are students who staged nonviolent demonstrations that are being held behind bars."

SUPPORT FOR THE NEW CONSTITUTION: "The government is making exemplary efforts. What advanced democratic nation in the world goes to rewrite their constitution? Turkey does and they will succeed at doing so. I am sure it will be an improvement. As for how much better it will be I don't know. Will people say that the 2013 Constitution is exactly what they were seeking? I hope that it will be this sort of constitution."

JUDICIARY PACKAGES: "Your Ministry of Justice has brought four separate judicial packages to the agenda. This was done in order to rectify certain issues. One being that people not be put in jail for crimes of thought. You must succeed at this and we will do all that we can to offer our support."

MORAL SUPPORT FOR THE PEACE PROCESS

THIS IS A TURKISH PROCESS: (On the ongoing peace talks with PKK leader Abdullah Öcalan) "This is a Turkish process. We are not intervening from outside. Plus, there has been no such request. However, we would like to offer moral support. The United States will continue to stand by Turkey for as long as the PKK continues to be an armed terrorist group."

A SYRIA WITHOUT ASSAD: "Both Turkey and the U.S. agree that the only way to reach a peaceful solution in Syria is for Assad to leave immediately. It is clear; there is no future with Assad. We are concerned that external forces (such as jihadist groups) may be negatively affecting the Syrian people's plight. We concur with the Turkish government's sentiments that "the risk of sectarian strife increases for as long as the conflict persists. The reason that the U.S. is acting reserved is this; 'We want to know exactly who it is that we are supporting."

U.S. PATRIOTS: "The American Patriot batteries are now operational. This constitutes an important example of the concrete support and solidarity between allies."

IRAQI GAS AND TURKEY: "Turkey, the United States and the Kurdish Regional Administration all share a strategic interest. That is, to consider Iraq as a whole and to provide access to the country's petrol and natural gas to the world markets. We want Turkey to be able to access all of Iraq's petroleum and natural gas and not just 20 percent."