“We are not lambs, we will draw a line” 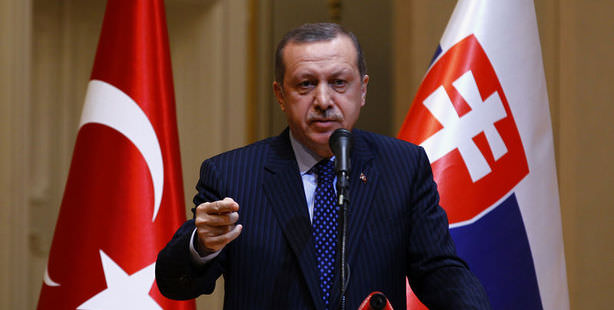 Delivering the message, “We are not lambs, we will draw a line” to the EU through the use of an anecdote, Prime Minister Erdoğan went on to comment on the U.S. Embassy attack by stating, “What really matters is unveiling the chain of perpetrators.”

While in Slovakia, Prime Minister Tayyip Erdoğan delivered a message by way of referring to an anecdote about a wolf that ate a lamb, and stated, "We are not lambs. At some point we will draw the line." Erdoğan also assured that the ongoing peace initiative with the PKK will not be derailed by any sort of terrorist attack including the recent bombing at the U.S. Embassy in Ankara.

On his final stop of a three-country trip to Europe, Prime Minister Erdoğan met with Slovakian Prime Minister Robert Fico for both one on one and inter-committee meetings after which he relayed the following messages in a joint press conference:

(When asked if there is any point at which Turkey will say 'enough is enough' to the EU?)
"We knocked on the door of the EU in 1959 and officially applied in 1963. It has been 50 years and we are still at the door. They are unable to say to us, 'you didn't fulfill this or that.' In other words, if you want to give someone a negative response, then the excuses you can contrive are endless. Of course, I consider Robert to be an exceptional friend. We have an old joke that goes something like this. The wolf is about to eat a lamb, when the lamb says, 'what did I do, why are you going to eat me?' The wolf responds by saying, 'because you muddied the water.' And he goes ahead and eats the wolf. It has always been like this up until now, however it will not continue this way. We are not lambs. However, we are waiting patiently. How far this will go is another issue. Of course at some point, we will also draw the line."

(On whether the attack on the U.S. Embassy in Ankara will affect the ongoing peace process…) "There are a number of assessments and interpretations being made externally about this attack. Let me state clearly, "Those coming from the U.S. or even Germany and France will not obstruct our efforts in İmralı (with PKK leader Öcalan) whatsoever, even if they had wanted to. We are currently working on a timeframe. What really matters is unveiling the chain of perpetrators. This was a suicide bombing. Who was in charge, how did it get here and who are the people that were connected needs to be revealed."

Speaking at the Slovakia-Turkey Business Forum, Erdoğan stated the following:

"Turkey began accession negotiations with the EU in 2005. What began with great excitement and determination by our nation has progressed slowly due to inauthentic obstacles that we have been faced with by the EU. The fact that these obstacles are political has greatly ruffled our enthusiasm.

The situation with Southern Cyprus has nothing to do with our EU acquis communitaire. We are not a country that will be a burden to the EU we are one that can take the burden off. It is already pretty evident which member nations are posing a burden to the EU.

ERDOĞAN: WE HAVE NO TIME TO LOSE

After his return to Ankara following a three-day, three-country trip to Central Europe, Prime Minister Erdoğan made a series of important announcements from Esenboğa Airport.

WE HAVE CERTAIN SENSITIVITIES: (When reminded of BDP member Pervin Buldan's insistence that the party's co-chairs be the ones to hold peace talks with the imprisoned PKK leader in İmralı.)
"They do not have the authority to decide on their own who will or will not go to İmralı Island. Our Ministry of Justice will be making the decisions on this matter and whomever they grant authorization to will be the one to go. We have certain sensitivities when it comes to who can or cannot go. That is because we are the ones who have started this whole solution process and we have no time to lose to those who are trying to overshadow this peace initiative," stated Erdoğan.

A CONSENCUS REACHED ON VISAS

During Tayyip Erdoğan's meetings with Fico a mutual agreement was reached to establish certain visa exemptions between the two nations. Erdoğan commented on the consensus reached by stating, "As soon as I return we will be taking steps to ensure that the entrance of Slovakians into Turkey will be further facilitated and visa requirements made exempt. Slovakia will also be exempting visa regulations for Turkish businessmen, academics, students and artists," said Erdoğan.

A MEMORIAL FOR 21 MARTYRS

Erdoğan also announced plans to erect a memorial cemetery in Bratislava for the 21 Turkish victims whose graves were recently uncovered in Slovakia. "I want to thank the Prime Minister for already giving the orders and as soon as possible, we will be establishing a memorial cemetery for these victims," stated Erdoğan.

A START TO TANAP

Erdoğan also mentioned the Nabucco project, warning the EU of its inability to progress. "Unfortunately, there has been no advancement in the Nabucco project. The supplying of natural gas in Nabucco was a responsibility of the EU administration. However, there has been no progress. We have taken another step and that is with the TANAP project. This move we made with Azerbaijan was approved by our parliament and I am pretty sure the dozers will begin working within the year."