“Assad needs to recognize reality and relinquish his position” 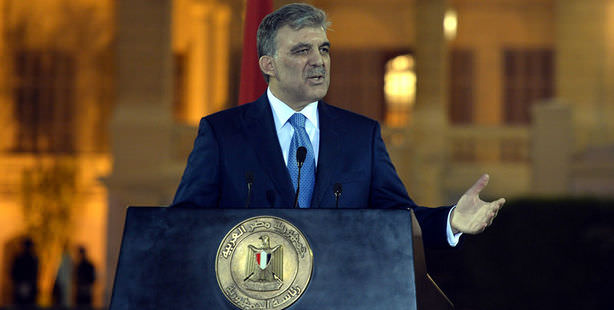 Speaking at the Organization of Islamic Cooperation (OIC) summit in Cairo on Thursday, President Gül pointed out that the situation in Syria is only becoming more tragic and said, “Assad should not be allowed to destroy Syria any further.”

During his address at a session for the 12th summit of the Organization of Islamic Cooperation (OIC), President Abdullah Gül commented on the situation in Syria by stating, "The current administration needs to recognize the realities of the situation and relinquish their power in order to ensure there is no further destruction to Syria and the Syrian people."

During his address, President Gül touched upon both the situation in Syria as well as Palestine. "I want to wish for God's mercy on our brothers in Palestine and Syria who have been killed by bombs rained on them by oppressive and tyrant regimes. The only way it will be possible to reestablish security and stability in Syria is for the violence indiscriminately exerted by the current regime to come to an end and for the legitimate aspirations of the public to be fulfilled.

Among other things, we want to express our gratitude for the hospitality and support offered to the Syrian National Coalition (SNC) which is fighting for the rights of the Syrian public. What needs to be done at this present stage is to put an end to the ongoing violence in the country immediately and to enable a political transition period leading to democracy. Therefore, the current administration needs to recognize the realities of the situation and relinquish their power in order to ensure there is no further destruction to Syria and the Syrian people," said Gül.

President Abdullah Gül also attended a joint press conference with Egyptian President Mohamed Morsi, during which he stated that the crisis in Syria was their top priority and that within this framework they had held a meeting with Iranian and Egyptian counterparts to discuss the issue.

"We have begun efforts to ensure that Syria no longer has the opportunity to consume itself. Our foreign ministers will be discussing the details. We hope to be able to contribute to putting an end to this terrible course of events. When we see what is happening in Syria it feels like it is our own homes that are being burned down and our own people that are dying. The situation in Syria pains us to this degree," said Gül. President Gül also mentioned that a decision had been reached to hold the next OIC summit in Turkey.

During Morsi's statements, he expressed that they have been working with Turkey in order to put an end to the bloodshed in Syria. "The most important point when it comes to Syria is for the bloodshed to come to an immediate halt. This is the main issue for us and we hope that we will be successful," stated Morsi. Mentioning the ten billion dollar trade between the two countries, Egyptian President Morsi called on Turkish businessmen to, "take advantage of the opportunities and possibilities in Egypt."

AN ANNOUNCEMENT OF SUPPORT FOR THE MALI ADMINISTRATION

During the closing session of the OIC summit, Turkey, Iran, Saudi Arabia and Egypt were invited to create a four-way contact group to handle the crisis in Syria. The closing statement called for "an immediate cessation to the ongoing violence in Syria" and called on the UN Security Council to take on responsibility for the crisis. The closing statement gave extensive room to the situation in Palestine and stated that a decision had been reached to hold a conference attended by benefactors in order to produce financing for the sectors in urgent need in Jerusalem. The closing statement also included an announcement of support for the national transitional government in Mali's efforts to regain its territorial integrity.