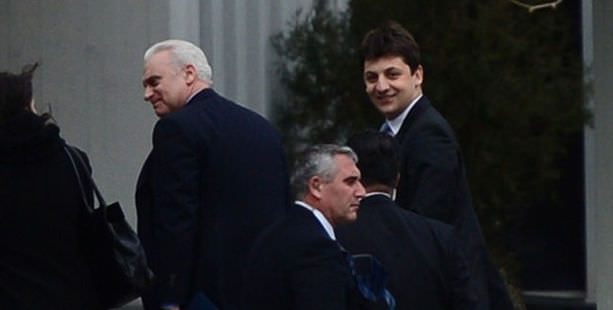 Foreign Ministry Undersecretary Sinirlioğlu offered a warning in diplomatic terms to the U.S. Ambassador to Ankara, Francis Ricciardone, who recently commented that the Turkish judiciary is slow to charge suspects. “These sorts of criticisms are unacceptable. Similar statements should not be repeated,” stated Sinirlioğlu.

U.S. Ambassador Francis Ricciardone has been the recipient of backlash, first from the ruling Justice and Development Party, or AK Party, followed by diplomatic channels for his comments on the Turkish judicial system. Foreign Ministry Undersecretary Feridun Sinirlioğlu told the U.S. Ambassador, "These sorts of criticisms are unacceptable. We are expecting that similar statements will not be repeated. We would like for these sorts of incidents between the two countries to never be repeated," in a meeting which lasted for over two hours. Meanwhile, the U.S. Ambassador wasted no time in sending out an explanatory letter to AK Party Deputy Chairman Hüseyin Çelik following the escalation of the incident.

U.S. AMBASSADOR PAYS A VISIT TO THE FOREIGN MINISTRY

The battle of words which has been ongoing between U.S. and Turkish officials was ultimately transferred to the Foreign Ministry building in Balgat. Yesterday at 15:30, Foreign Ministry Undersecretary Feridun Sinirlioğlu and U.S. Ambassador Ricciardone met at the Foreign Ministry for the first time since the February 1st bombing of the U.S. Embassy in Ankara for a meeting which lasted two hours and 15 minutes.

LET'S HAVE NO REPETITIONS!

It was during this meeting that Sinirlioğlu commented on the Ambassador's statements made on Tuesday that inferred the Turkish judicial system was slow in charging detained military members and journalists. These sorts of criticisms are unacceptable. It is unacceptable for you make these sorts of remarks on the internal affairs of a nation with an independent judiciary. We are expecting that similar statements will not be repeated. We would like for these sorts of incidents between the two countries to never be repeated," stated Sinirlioğlu.

While Sinirlioğlu expressed the Turkish government's disappointment in the comments which they consider to be interfering in Turkey's domestic affairs, Ricciardone supposedly stated, "We support our friend and ally Turkey's progress in protecting human rights and strengthening the superiority of the law. I urge you to carefully read what my comments actually said."

Terrorism was actually the main issue focused on during the extensive meeting. U.S. sources state that the Ambassador thanked Turkish establishments for their solidarity and cooperation following the attack on the U.S. Embassy in Ankara and said that the main agenda right now is collaborating in the fight against terrorism. According to the information obtained, during the meeting, the two discussed their joint struggle against the DHKP-C and the PKK as well as other terrorist organizations, including Al Qaeda. Within the framework of the two nations' joint collaboration against terrorism, the U.S. Ambassador also relayed his expectations for the draft law voted on in the Assembly regarding the prevention of terrorism financing.

IT TOOK SIX DAYS TO MEET

According to the information obtained; Ricciardone had requested a meeting with Sinirlioğlu six days prior. Sinirlioğlu returned to Ankara with Prime Minister Erdoğan on Wednesday and immediately granted the U.S. Ambassador a meeting. When news surfaced yesterday that Ricciardone had been summoned to the foreign ministry, the U.S. Embassy relayed the information that the Ambassador had requested the meeting himself. A U.S. diplomat also shared with SABAH, "This is not a summons the Ambassador is going to the meeting on his own accord. This is a routine meeting," said the source.

A LETTER OF EXPLANATION

Ricciardone sent a letter explaining his remarks to the AK Party Deputy Chairman Hüseyin Çelik, who had criticized his comments by saying the ambassador should "know his place." Attached to the letter was a detailed account of the questions and answers provided during Ambassador Ricciardone's meeting with journalists, when he made the contentious comments. The U.S. Ambassador is said to have written, "When you read my responses you will see that my comments were misrepresented. My efforts are entirely focused on advancing Turkish-American camaraderie." With this letter, which diplomatic sources say was sent prior to yesterday's meeting; the U.S. Ambassador has, in diplomatic terms, apologized for his comments.

"He simply repeated what Clinton has said"

U.S. State Department Spokesman Victoria Nuland also commented on Ricciardone's statements in her daily press briefing yesterday by stating, "Ambassador Ricciardone was simply repeating what Secretary Clinton had said, what I'm sure Secretary Kerry will say when he has a chance to speak publicly on these things," Nuland told reporters. Nuland went on to state, "It is incumbent on Turkey's friends and allies to continue to respectfully point out the importance of Turkey making steady progress in strengthening the rule of law, strengthening protection of human rights, and of protecting free expression for journalists, for bloggers. This is not new from us. We have been quite open, both publicly and privately, in Turkey."

Çelik: He should know his place

AK Party Deputy Chairman Hüseyin Çelik responded to Ricciardone's comments by stating, "The Ambassador should know his place." Çelik also announced yesterday that Ricciardone would be warned during the meeting at the foreign ministry. Çelik said that the U.S. Ambassador should not cross the boundaries of his diplomatic position and should refrain from interfering in Turkey's domestic policies, sentiments, he said were backed by the ruling party. Deputy Prime Minister Bekir Bozdağ said Ricciardone should "mind his own business and stop interfering in Turkey's judiciary affairs."

Approximately two years ago, at the start of U.S. Ambassador Francis Ricciardone's term, he had commented on the ongoing Oda TV and Sledgehammer cases as well as on press freedom in Turkey. At the time, Prime Minister Erdoğan had warned the ambassador on his comments. Two years have passed and Ricciardone has repeated his sentiments, once again criticizing the lengthy detainment periods in the Turkish judicial system.

A BATTLE OF WORDS

The back and forth traffic of reproachful statements actually began with Israel attacking Syria. First, Prime Minister Tayyip Erdoğan referred to Israel as a "spoiled boy," then Foreign Minister Ahmet Davutoğlu stated, "Why hasn't Assad retaliated to the Israeli operation. He bombs his own people yet doesn't even throw a pebble at Israel."U.S. State Spokesman Nuland responded to a question regarding the comments during a daily briefing held Tuesday by stating, "Inflammatory comments from Turkish leaders, are obviously very troubling for us and we have conveyed our concerns on this matter with senior Turkish officials." Ankara's response to the comments was, "We were drawing attention to the oppression exerted by Syria on its own public."