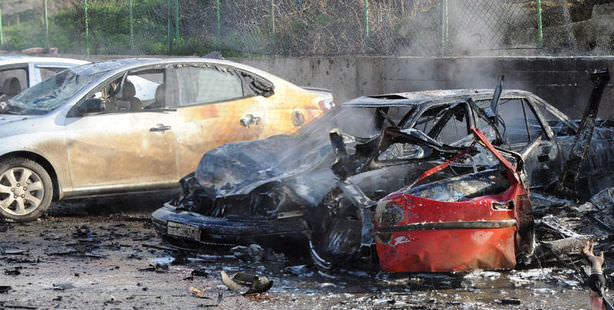 A Syrian minibus exploded at a crossing on Turkey's border with Syria near the Turkish town of Reyhanli, Hatay on Monday, killing at least 13 people including Turkish citizens and wounding dozens more.

Witnesses said they saw the vehicle drive up to the Cilvegözü border post, one of the main crossing points for Syrian refugees into Turkey, shortly before the explosion.

Deputy Prime Minister Bülent Arınç said the government was investigating all possible causes for the blast, including a suicide attack, but it was wrong to jump to hasty conclusions. "The information that we have for now is that a minibus with Syrian number plates coming from the other side of the border exploded. It was a powerful blast," Arınç, who is also the government spokesman, told reporters after a cabinet meeting. "But whether this was a vehicle laden with explosives or another type of explosion, I think, at the latest, will become clear tomorrow," he said. Turkey's interior, justice and customs ministers were due to fly to the area later on Monday to be briefed on the incident.

Prime Minister Tayyip Erdoğan said the death toll from the blast had risen to 13, including three Turks. At least 28 people were wounded, 13 of them seriously. The minibus exploded as it was driving through a stretch of no-man's land between the two countries only meters away from the Turkish border gate, where scores of Syrian civilians and Turkish humanitarian workers were congregated, Arınç said.

Television footage and photographs showed severe damage to a series of vehicles at the border, where a gate was blown open and part of the roof collapsed.