'We have not steered away from the EU' 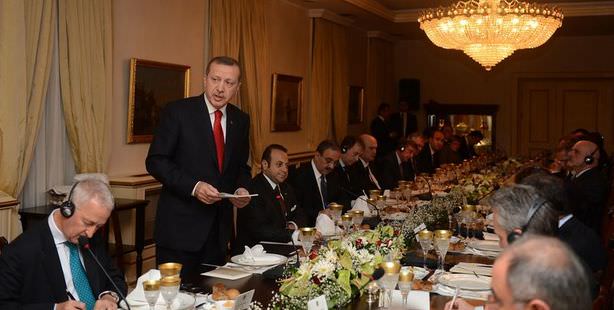 Prime Minister Erdoğan hosted a dinner attended by ambassadors of EU countries that was held at the Prime Ministry in Ankara on Monday.

During an address made at the meeting of EU nation ambassadors, Prime Minister Tayyip Erdoğan said, "Turkey has not steered away from its EU objectives, even though there may be some who wish we would. It is obvious however, that we have made significant strides," stated Erdoğan who went on to deliver the following messages on Turkey's EU negotiations process as well as the situation in Syria during the dinner:

INTERNAL AND EXTERNAL DYNAMICS: "We do accept the fact that yes, military interventions and the separatist terrorism that has been ongoing for 30 years has led to serious interruptions in Turkey's democratic steps. However, it must also be accepted that in all of these issues, external dynamics played just as much a part, if not more, as internal dynamics."

NOT DISTANCED FROM TERRORISM: "We have taken great care to protect the delicate line between the democracy we have achieved and security. However, it cannot be considered fair that at the same time the EU repeatedly criticizes certain reforms and procedures, they continue to refrain from distancing themselves from terrorism. I am sorry but this is a double standard."

THE BEST RESPONSE TO RACISM: "We are witnessing with great concern how some European leaders promote racism in trying to win votes. Turkey's EU membership would prove to be the best example against racism."

THE NEGOTIATION PROCESS WAS POLITICIZED: "Turkey has not steered away from its EU objectives. There may be some who wish we would or may be expecting us to, however quite the contrary it is clearly apparent that when it comes to chapters we continue to take determined steps. Having waited outside the door for 54 years, Turkey has been subjected to a negotiation process that no other candidate country had to endure. A negotiation process that was supposed to go by rules was instead completely politicized."

CRITICISM ON CHAPTER OPENING: "Not a single chapter has been opened to negotiations in two-and-a-half years. This constitutes a first in the history of EU enlargement and it is impossible for us to accept the continuation of this situation, which we deem to be a sign of disrespect towards Turkey. If the political obstacles were removed, Turkey is in a position and has the capability to open ten chapters in the next 12 months and 15 chapters in the next 18 months. We are now waiting on the EU to take concrete steps."

WE WILL SIGN THE READMISSION AGREEMENT: "Turkey is the only country amongst EU candidate nations that is required to obtain a Schengen visa. When we are shown a roadmap that contains solutions made by taking our sensitivities in consideration, then we will sign the readmission agreement and begin the approval process."

WHAT IS HAPPENING IN SYRIA IS A HUMAN TRAGEDY

"The situation in Syria has become a human tragedy. Over 60,000 lives have been lost since the violence began and over 600,000 have been forced to flee to neighboring countries. Two-and-a-half million Syrian nationals in Syria have quite literally been made into nomads. Nearly 250,000 Syrians are currently guests in our country. We have spent over 600 million dollars from our own budget on Syrian refugees. The Assad administration, which has lost all legitimacy, needs to step down and the path must be cleared for a peaceful transition period to begin in Syria."