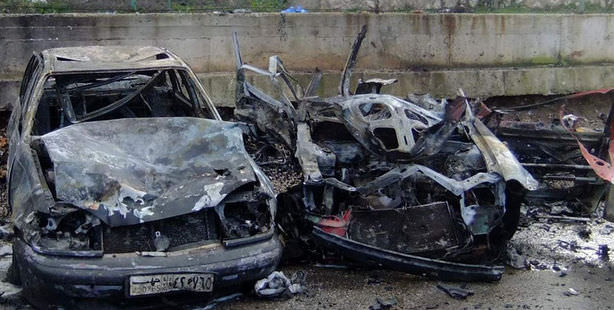 Authorities have spotted three individuals seen parking the bomb-laden vehicle which exploded on the Turkish side of the Cilvegözü Border Gate, killing 14 on Monday. Two of the suspects were seen crossing back into Syria while one of the perpetrators, who was wearing a red jacket, was seen entering Turkey. Police are now trying to identify the assailants.

On Monday, an explosives-laden vehicle which entered the Cilvegözü Border Gate, located opposite the Syrian gate of Bab al-Hawa in Hatay's Reyhanlı district, exploded killing 14 people at the border crossing point regularly used by Syrian refugees entering Turkey for shelter.

Responding to journalists' questions, Interior Minister Muammer Güler clarified that the explosion did not take place in a minivan, as originally suspected. The vehicle was a gray car, said Güler, which arrived from Syria at 14:14 on Monday and parked in a buffer zone 21-meters distance from the border. The explosion took place 23 minutes later.

Güler said they saw three suspects exit the vehicle. "We are now looking into identifying these three perpetrators. One was a woman, and two of them returned to Syria, while one entered Turkey. We are working on trying to identify the assailant who entered Turkey," stated Güler. When asked if he thought the attack was directed at the Syrian opposition or whether it was planned as a terrorist attack, the Interior Minister responded by stating, "Of course it was a terrorist attack."

According to information received by security forces, one of the individuals seen parking the car was wearing a red jacket and ended up entering Turkey. Police are intensifying efforts into identifying the three assailants, which were caught on video surveillance.

Authorities are looking into the possibility the individual may be connected with one of the terrorist organizations active in Turkey and are therefore comparing his description to those in intelligence files. Police will also be showing the suspects' photograph to Syrian refugees staying in camps in Turkey, under the off-chance they are Syrian nationals. Meanwhile, authorities have learned that 35-50 kilograms of explosives were used in the blast.

VEHICLE NOT REGISTERED IN TURKEY

Monday's bombing at the Turkish Cilvegözü Border Gate with Syria, has left 14 dead, four of which were Turkish nationals and wounded dozens. The four Turkish victims, Hasan Dağ (17), Ahmet Taş (35), İbrahim Yalçınkaya (15) and Ali Sille (29) were buried in ceremonies in their hometowns on Tuesday.

This is a translation of an article originally written by Zübeyde Yalçın and Alper Sancar.