BDP delegation to meet with Öcalan 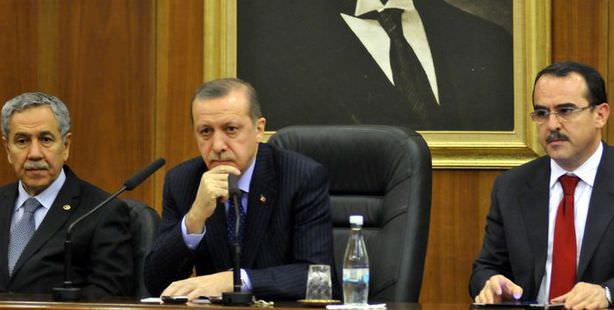 Prime Minister Erdoğan has announced that a second delegation of BDP members will be meeting with Öcalan. “Two or three individuals which conform to our framework of principles will be selected to meet with the PKK leader in İmralı,” states Erdoğan.

According to sources, Prime Minister Tayyip Erdoğan and Justice Minister Sadullah Ergin convened for a follow-up discussion after meeting to discuss the fourth judiciary package. The two met at the Prime Ministry where they deliberated on the ongoing initiative to hold peace talks with Abdullah Öcalan, the leader of the PKK terrorist organization who is imprisoned in a penitentiary on İmralı Island.

During the meeting, a road map was formulated for the ongoing peace talks and it was decided that three members of the Kurdish opposition Peace and Democracy Party (BDP) will meet with Abdullah Öcalan either this week or next week.

Erdoğan announced the decision prior to the AK Party Central Executive Board meeting held at the Ankara AK Party Headquarters, by stating, "Two or three individuals which conform to our framework of principles will be selected to meet with the PKK leader in İmralı."
Erdoğan also went on to relay the following messages:

THE HUMAN THING TO DO

(On Erdoğan's hospital visit to retired General Ergin Saygun, who was sentenced to 18 years in prison for his involvement in a coup plot)

Issuing sentences and convictions is a practice based on the current laws of this nation. Mr. Saygun, whose sentence has been legally postponed to allow for his release for medical treatment, was a colleague of mine. He is older than me. We have actually travelled to the U.S. together. He was in our team for the infamous meeting held during the Bush administration era on November 5th, 2007 at the Oval Office. Therefore, he was a colleague of mine to this degree. I was concerned for Mr. Saygun's health a few months ago and have been closely following his condition. I also spoke with his daughter and doctor. I am very pleased to have done what the human thing is to do. If it had been another officer or sergeant, or anyone else, I would have done the same," stated Erdoğan.

"Bahçeli's world and our world are very different. He needs to learn the language of sincerity."

(On a second delegation of BDP members holding talks with Öcalan)

Erdoğan said a second delegation would be going to İmralı to meet with Öcalan either this week or the following week. "We have established what our principles are and two or three candidates that conform to those principles will be sent to hold talks."

(On the explosion in Cilvegözü)

"Our Ministry of Interior, Police Intelligence Bureau and National Intelligence Organization (MİT) are working jointly on the case. Our wish is that the case will come to a close after which we will release an official announcement. There have been a number of arrests. Some are being detained; some have been questioned and subsequently released. There is no doubt that if this is happening inside Turkey's borders the intentions were to provoke and drag Turkey into this. What we want is for the situation to settle down and then we will take a step, however nothing will remain unanswered to."
(On the 4th judicial package) "Efforts have been extremely productive. My colleagues will be working on the technicalities after which we will be evaluating the package within a tight framework and from there it will be passed on to the parliament."

(On the new wave of arrests in the Feb. 28th coup investigation)

"Anything can happen at any time. We do not want to experience certain negative incidents that have transpired in this nation in the past. We will do whatever necessary in order to ensure this. The judiciary is fulfilling their duties and as the executive, we are doing and will continue to do what befalls us. If legal arrangements are necessary, then the judicial will have to do their part. Hopefully, we will take these steps in order to ensure our nation is brighter and peaceful so our country can achieve an even stronger future," stated Erdoğan.