A new era in Turkish-Georgian relations 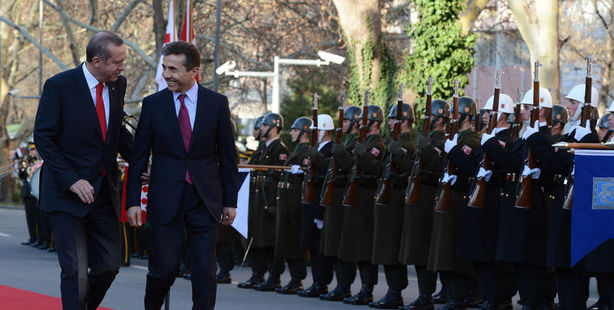 Georgian Prime Minister Ivanishvili was greeted in Ankara as both ‘a neighbor and a friend.’ In response to Ivanishvili’s statement that he, like Erdoğan, is not fond of formalities, Prime Minister Erdoğan welcomed his Georgian counterpart warmly for a meeting followed by a joint press conference which continued in the same vein with the two prime ministers even periodically breaking into laughter.

On his second trip abroad since being elected as the Prime Minister of Georgia, Bidzina Ivanishvili was welcomed warmly upon his arrival to Ankara. The Georgian Prime Minster was hosted by President Abdullah Gül at Çankaya Palace for a meeting that was also attended by Foreign Minister Ahmet Davutoğlu and also had the chance to speak with Parliament Speaker Cemil Çiçek. Later, Prime Minister Ivanishvili was also welcomed by Prime Minister Tayyip Erdoğan with an official ceremony at the Prime Ministry Building in the capital. After the meeting, the two held a joint press conference, the atmosphere of which reflected the close and warm relations between the two counterparts.

Georgian Prime Minister Bidzina Ivanishvili stated, "The meetings held all took place in a warm atmosphere. The Prime Minister is already very fond of Georgia. He has visited Batumi numerous times, and he is always welcome. Like me, Mr. Prime Minister is also not fond of formalities, therefore we can also speak over the phone," stated Ivanishvili. Prime Minister Erdoğan responded by stating, "We are not going to get hung up by protocol. We have agreed to keep our telephone lines open for one another 24 hours a day."

The following are a series of remarks released by Prime Minister Erdoğan during the joint press conference held with his Georgian counterpart Ivanishvili:

AN EMPHASIS ON TERRITORIAL INTEGRITY:

MUTUAL TRIPS HAVE DOUBLED: "As you may recall, we signed a protocol in May, 2011 during a trip I made to Batumi which lifted mutual visa requirements and allowed citizens from both nations to travel freely using just their identification cards. As a result, mutual trips have increased by over double. In addition, our future objective is to execute the protocol signed for a single-window customs system," stated the Prime Minister.

ENERGY PROJECTS WERE LAID TO THE TABLE: "We also discussed potential energy projects in-depth. In addition, we also talked about the repatriation of Meskhetian Turks, who were forced to abandon their homeland 70 years ago and have been living as exiles for years. It has pleased us that the Georgian Prime Minister was positive on the issue."

Commenting on the recent operations staged in European countries against the PKK, Prime Minister Erdoğan inferred that they were not enough and that militants need to be extradited. "We want to see results," stated Erdoğan.

IT ISN'T ENOUGH: We are more interested in what steps Germany and France will take beyond the arrests in police operations. We want to see results. Steps such as these have been taken for ten years now, however unfortunately we have failed to see results. Yet, we long to see results. Unless the terrorists are extradited to Turkey, these recent steps taken against the PKK will have no meaning for us," said Erdoğan.

IT COULD BE POSITIVE: "As for our EU negotiations process, France has blocked five chapters. France appears to now be taking a positive approach to chapter number 22, which is one that was previously blocked. This could positively affect Turkey's EU negotiations process during Ireland's term presidency. We will wait and see," stated Erdoğan.

During the press conference, Prime Minister Erdoğan also said that he and his Georgian counterpart had discussed the situation of arrested Turkish businessmen in Georgia and their possible extradition. The Georgian Prime Minister stated, "The Turkish businessmen were given fines, which they paid and were then subsequently released. These sorts of incidents are negative and I hope they will not be repeated in the future. I promise that we will not arrest your businessmen again and I want to emphasize that I will be doing everything I can in regards to the situation." Erdoğan stated that the issue was their release and for each of the businessmen detained to be tried in their own nation.

PRAISE FOR ÇALIK GROUP: Georgian Prime Minister Bidzina Ivanishvili also hailed praise for Çalık Group by stating, "Çalık Group has become an example. They cancelled their contracts with the previous government and have requested a new agreement. We are still negotiating, but we are pleased with the situation. That is because these firms will not lose out at all by doing business with us, quite the contrary, they will only gain," said Ivanishvili.