Ankara to deliver evidence to NATO 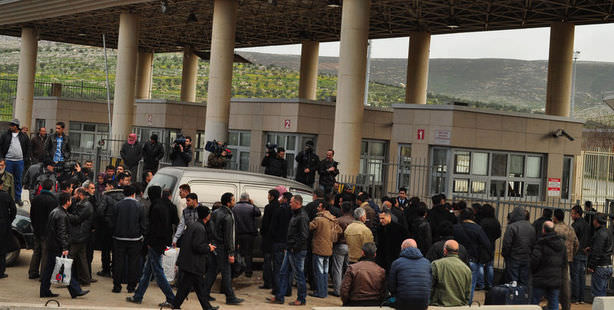 After the recent blast at Cilvegözü, a crucial border crossing point for Syrian refugees as well as aid convoys, Ankara is waiting to acquire concrete evidence on the perpetrators of the attack, which they will then use to appeal to the United Nations and NATO.

Ankara is trying to uncover who was behind the blast at the Turkish Cilvegözü border gate with Syria which took place on Monday before taking an international initiative. Once the assailants have been unveiled, Turkey will be embarking on an international appeal, starting with the U.N., to ensure justice is served and security established along Turkey's border with Syria.

Turkish police forces are hoping the evidence will reveal who was behind this heinous attack which not only targeted Syrian refugees seeking shelter in Turkey but also the primary crossing point for humanitarian aid deliveries. The Foreign Ministry as well as Foreign Minister Ahmet Davutoğlu have refrained from taking action at present due to the fact the investigation is still ongoing. The Ministry is solely relaying general information collected on the case.

In a meeting with his British, French and Italian counterparts in Paris, Davutoğlu did relay general details on the bombing however refrained from pointing any fingers. Davutoğlu sufficed to say, "It is evident this was a terrorist attack." While in France, Davutoğlu had the opportunity to share overall information on the current situation for Syrian nationals and to emphasize that the humanitarian situation in Syria is deteriorating daily.

The Foreign Ministry is seeking the answer to the question of 'who staged the attack and why' in order to be able to further explain the incident. Speculation surrounding the attack has included a multitude of potential perpetrators spanning from the Damascus administration, Al Mukhabarat, the PYD-PKK connection to even the DHKP-C. If those responsible are unveiled and proven to have connections to the Syrian regime, then Ankara will not only take additional security measures, they will also be calling on international organizations, especially the UN to formulate a response. Although if it does turn out that the Syrian administration was involved in contriving the attack, Ankara, which has taken on a zero tolerance policy against border violations, will continue to execute its open door policy for Syrian refugees. Ankara will not be closing its primary border gates which act as a corridor for Syrians to access humanitarian aid.

Access has somewhat resumed to the Cilvegözü Border Gate, which is located in Hatay's Reyhanlı district as Turkish lorries which were transporting aid were allowed to cross into Turkey and yesterday border officials allowed Syrian nationals driving their own vehicles to return into Syria. Security measures were intensified as each vehicle was seen thoroughly searched before being allowed to pass.

Syria's secret service Al Mukhabarat has supposedly been staging a psychological war by way of warning that Turkey is a dangerous country and to therefore not go there or to return to Syrians both already in Turkey and in Syria. Security forces say the Al Mukhabarat is using members posing as 'Syrians who have escaped the war' to come to Turkey to spread its propaganda. According to information obtained, after a thorough investigation, Turkish intelligence units have deported these suspects. Security forces also state that the Al Mukhabarat is using similar tactics within Syria by way of infiltrating agents to instill the notion that 'Turkey is unsafe and victim to bombings.' They have supposedly been staging this intense propaganda in order to prevent Syrians from crossing the border into Turkey.