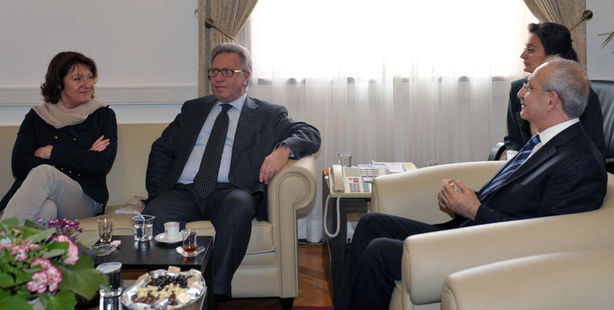 Co-Chair of the EU-Turkey Joint Parliamentary Commission Helene Flautre reacted to the lack of support by CHP to party leader Kılıçdaroğlu regarding the “mother tongue” resolution.

Chairman of the Republican People's Party (CHP) Kemal Kılıçdaroğlu held a separate meeting each with the President of the Venice Commission of the Council of Europe Gianni Buquicchio and EU-Turkey Joint Parliamentary Commission Helene Flautre in his office at parliament.

Commenting on the recently passed regulation to allow defendants to speak their mother tongue while providing defenses, Flautre said, "We do not understand why the CHP would be against such critical legislation."

Kılıçdaroğlu responded by stating, whoever said anything to the effect is lying. We feel the government isn't doing enough. We have proposed allowing defendants to speak their mother tongue in police stations and in questioning, however it wasn't passed."

Buquicchio suggested the Constitutional Conciliatory Commission and the Venice Commission work in collaboration.