"One day the UN Secretary General will apologize for Syria” 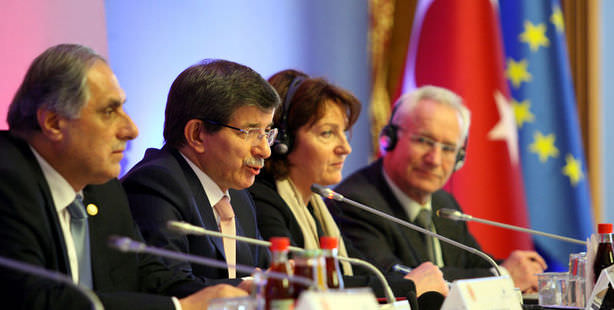 Criticizing the fact that the United Nations has yet to reach a resolution on the situation in Syria, Foreign Minister Davutoğlu said, “Just like what happened in Srebrenica, one day the UN Secretary General will be making an apology on the streets of Homs.”

Frustrated by the inaction of the international community on the crisis in Syria, Davutoğlu accused the United Nations of not bearing political responsibility and warned, "Do not freeze a solution to this crisis it will only increase the risks."

Speaking at a Turkey-EU Joint Parliamentary Committee meeting on Syria held in Ankara on Friday, Foreign Minister Ahmet Davutoğlu stated, "If Turkey was in the EU, the situation in Syria would be different." Davutoğlu went on to state, "Whoever the public elects to lead them in Syria will be a friend of Turkey's. Europe needs to express this sentiment with the same form of clarity. We, as Europeans and as Turks, and all European institutions and nations need to say, 'We respect whatever decisions are made by the Middle Eastern people and whoever is brought into power, will be their choice," said Davutoğlu.

Foreign Minister Davutoğlu went on to remind of how Syrian National Coalition President Moaz al-Khatib recently stated that he was ready to speak with members of the Syrian regime that have not gotten caught up in the bloodshed , however the Syrian regime did not respond affirmatively.

"What happened when a sensitive man of stature such as Moaz al-Khatib who despite his age, position and leadership is brought to tears when reminded of what is ongoing in Syria, yet puts aside his grief and buries the ache in his heart to call on the administration to reach a solution? What was the Syrian regime's response… they just continued to strike even harder," stated Davutoğlu.

Foreign Minister Davutoğlu also criticized the lack of a resolution coming from the U.N. on both the humanitarian issue as well as for war crimes being conducted in Syria. "Unfortunately, due to the lack of response from the international community, just like in the 1990's people are being forced to flock to Turkey. Turkey in turn is expected to bear all responsibility. We have no problem taking on our humanitarian duty. However, it should be made well-aware that political responsibility lays on the United Nations Security Council, which despite the deaths of 70,000 people, still refrains from issuing a resolution, a situation similar to that of what happened in Bosnia-Herzegovina. I am sure that as a result, one day a new UN Secretary General may enter the streets of Homs and apologize to the Syrian public for the international organization's inaction," stated Davutoğlu.

The Turkish foreign Minister also announced that the number of Syrian refugees living in camps in Turkey has risen to 182.000.

FM SAYS TO GREEK DEPUTY: "IF ONLY YOU COULD HAVE COME HERE AS AN MP FOR CYPRUS"

Greek Cypriot Deputy Eleni Theocharous commented on Davutoğlu's remarks that one day the UN Secretary General will apologize in Homs, by stating, "Are you then going to apologize for the slaughter staged by the Turkish army?"

Davutoğlu responded to the Greek Cypriot Deputy's remarks criticizing the Turkish military's peace operation in Cyprus in 1974 by stating, "The Turkish military didn't just wake up one day and say, 'hey let's go to Cyprus.' We went there at that time because there was a man sharing the same mentality as Bashar Assad named Nikos Sampson who was an extension of the Greek junta and had overthrown the government. If we had not gone at that time, Sampson would have either massacred the Turks there or forced them into exile or he would have staged the greatest oppression ever over the Greeks."

Davutoğlu also reminded the Greek Deputy of their failure to accept the 2004 Annan Plan, stating, "If the resolution had been accepted at the time, right now we would have shared a symbolic unity with Greece on the island. You were the ones that made that choice," stated Davutoğlu.

Pointing out that had the 2004 Annan plan for Cyprus been adopted and the island unified, "then not only would we not have felt the need to hold this very conversation, but you also and I wish this were the case, would not be here as the deputy of an unrecognized country, you would have instead come here as a representative of a unified and peaceful Cyprus," stated Davutoğlu.