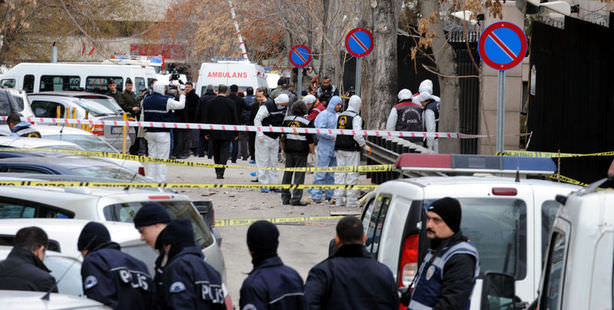 In the wake of the suicide bombing on the U.S. Embassy in Ankara, 400 terrorists with red bulletins out on their names have been requested from Interpol. Meanwhile, Turkey’s Scientific and Technological Research Council is working on creating a detector that will be able to determine whether someone is carrying explosives from a distance.

Following Prime Minister Tayyip Erdoğan's criticism of countries that support terrorism in which he called on them to "stop delaying", a significant step has been taken to ensure collaboration in the fight against terrorism. With Germany's Interpol at the forefront, countries that have refused requests for extradition have been given an extra warning. German Chancellor Angela Merkel has been reminded of files for the assailants responsible for planting a bomb in a tutoring center in Şırnak and for staging armed robberies in Istanbul. With over half of the 400 suspects wanted by Interpol residing in Germany alone, the country has been requested to take concrete measures on the issue.

Working in collaboration on the attack on the U.S. Embassy in Ankara, Turkey's National Intelligence Organization (MİT) and the CIA have both requested information from Interpol. Acting under the assumption that the risk is still present, the United States has been tracking down perpetrator Ecevit Şanlı's ties in Germany and his connection to the terrorist organization. The request for information sharing was relayed to Interpol in writing. Both Germany and France claim in regards to the extraditions that there are 4,000 judicial cases that they are currently tracking.

Minister of Science, Industry and Technology Nihat Ergün recently remarked on the fact that Turkey had requested the extradition of Şanlı, the suicide bomber in the U.S. Embassy numerous times in the past.

"We are not seeing the solidarity we would like from the EU in the fight against terrorism. This latest suicide bombing is evident of this. Despite our insistence, Germany refused to extradite the man responsible for the bombing. In the end, he came to Turkey and staged an attack. We never saw any form of cooperation," stated Ergün.

Science, Industry and Technology Minister Ergün also relayed information on a new project supported by the Scientific and Technological Research Council of Turkey (TÜBİTAK), for a detector that will be able to detect explosives from a distance. "There is a number of ongoing university studies geared towards being able to respond early to these sorts of attacks. As TÜBİTAK, we are not only engaged in these sorts of projects in our own institution, but we also offer serious support to projects worked on by universities. Sixty percent of expenditures are covered by TÜBİTAK," said Ergün.

A project conducted by Gebze's High Technology Institute and sponsored by TÜBİTAK aims to create a detector which will be able to detect explosives carried on the body from a distance. By using a Nuclear Quadruple Resonance (NQR) technique, detectors will be able to distinguish items hidden on the body.