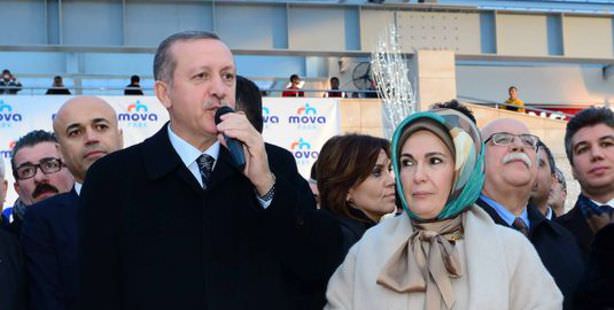 Speaking from Mardin, Prime Minister Erdoğan criticized ethnic nationalism, especially at this time in which an ongoing peace initiative is anticipated to put an end to violence, by saying, “Anyone who conducts ethnic nationalism is instead seeking social deviation, corruption and disorder. Nobody should come to us with the notion of Kurdishness or Turkishness while this process is ongoing,” said Erdoğan.

Prime Minister Tayyip Erdoğan addressed crowds in Mardin's Midyat and Kızıltepe districts, calling for an end to be put to terrorism. From a joint inaugural ceremony in Midyat, Erdoğan said, "I am calling on Turkey for us to altogether say no to terrorism. Let us all speak out together for the weapons to be silenced and for ideas and politics to talk."

Prime Minister Erdoğan delivered the following messages during a series of addresses made yesterday:

"Those who claim that their own race is superior to others are following on the devil's path. We are a single nation residing on the land of the Turkish Republic. Our nation consists of Turks, Kurds, Arabs, the Laz and Circassians. Anyone who conducts ethnic nationalism is instead seeking social deviation, corruption and disorder. We will continue to act as one, as alert and as powerful and strong on this land.

We are against discrimination and regional, ethnic or religious-based nationalism. We are currently engaged in a solution process. During this time, no one should come to us with the notion of Kurdishness or Turkishness. We are a government that has been able to overcome all forms of nationalism. Our nationalism is about philanthropy and standing beside the nation's impoverished.

We will all put up a strong fight together against terrorism. I believe that my brothers in Midyat are brave and courageous. When someone tells them to pull down their shutters, they won't and they will reply, 'I am sorry but no one can bring down the shutters or doors to our hearts.' If you take notice you will see that the terrorist organization has recently been targeting educational institutions. The reason being that they do not want people from this region to be educated, they want them to remain poor and jobless. This is because they do not want to run out of the youths whose blood they shed and who they have programmed to kill and be killed.

We are children of the same land, same history and same civilization. Those who are trying to divide us have other calculations. Hostility, hatred, rage and violence will only please our joint enemies. A great atmosphere of hope has developed throughout Turkey. While we talk of hope here, Rize is expressing the same sentiments. Istanbul is just as hopeful as all of you are here right now. Let's not waste this hope. Let us also not allow the opportunity for those who want to put an end to this process to do so. We will no longer please our enemies, and will instead be bringing joy to the mothers, the fathers and the nation's women.

Today, I am speaking out to Turkey from Midyat. We will all say no to this violence together. We will all say, 'stop, let the weapons be silenced and the ideas talk, let politics talk.' We embarked on a solution process through our National Unity and Brotherhood projects in which the weapons will from here on out be buried and everyone will be able to act on their own volition as well as have the opportunity to serve in politics.

When everyone is granted their rights and liberties, the problems in this nation will truly and permanently have been solved. This is why we value the new constitution for the National Unity and Brotherhood Project. We are the ones that wanted the new constitution. We have shown our sincerity from the start. As a party with 325 parliamentarians, we are only represented by three individuals in the Constitution Conciliation Committee, whereas, the three other parties in the assembly have 215 parliamentarians and are represented by nine members in the commission. Our Speaker of the Assembly says let's complete the process by the end of March and so that is what we are working towards," stated Erdoğan.