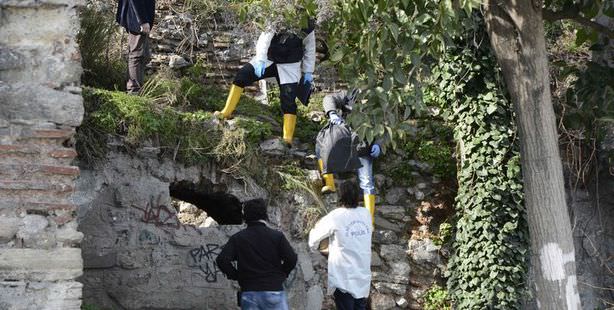 The murderer who killed American tourist Sarai Sierra has been identified through DNA testing. A strand of suspect Ziya Tasalı's, which was obtained from a pillow in his brother’s house, was an identical match to a blood sample found on Sierra’s clothing.

Police have honed in on the man suspected of murdering American tourist and mother of two Sarai Sierra, whose body was found in the ruins of the city's ancient walls on February 2. Police have matched the DNA from a strand of hair from the number one suspect in the murder to a drop of blood found on the woman's person. The strand of hair belongs to a man named Ziya Tasalı, a paper collector who goes by the name of "Laz Ziya." The strand of hair was taken from a pillow Tasalı slept on in his brother's home in Karabük. With the identical DNA match, Ziya Tasalı is now wanted for being the number one suspect in the murder. It is thought that Tasalı may be intending to escape to Syria through Hatay.

On January 21st, Sarai Sierra, who was on a solo photography trip to Istanbul, vanished into thin air. Police immediately initiated a wide-spread investigation into tracking down the young mother of two, who was last seen in and around the Gülhane district. On February 2nd, the search came to an end. Sierra's body, which had begun to decompose, was found covered by a blanket in a corridor of the ruins of the city's ancient walls in the Cankurtaran district. Sarai Sierra was presumably killed by a blow to the head with a stone. There were no witness and no surveillance footage recorded of the incident. The only concrete evidence police had to work with was a drop of blood on the shirt Sierra was wearing. Inspection by the criminal lab proved the blood wasn't Sierra's. The question of course then became, 'well whose was it?'Detectives began seeking high and low for a lead. Blood samples were taken from 30 homeless residents in the region for DNA analysis. Detectives had uncovered that Ziya Tasalı was also a local homeless man, however he never surfaced again in Istanbul. Security forces contacted his family in Karabük and managed to find a highly sought-after piece of evidence. Detectives found a strand of Tasalı's hair on a pillow he had slept on, which they immediately sent in to the Homicide Bureau for testing. The report showed a 100 percent identical match to the blood found on Sierra.

The DNA results turned Tasalı, who was already wanted in connection to the case into the prime suspect. Tasalı is said to be in Hatay at present and is planning to cross into Syria. Police are also seeking out other assailants that could be implicated in the case for assisting Tasalı in either the murder itself or in transporting her body. According to testimonies, there were four individuals who assisted in the murder.

Hasan B. (34) who is a homeless resident in the area where Sierra's body was found and has provided a blood sample in the investigation told police, "Sierra was wandering around the city walls. She took a photo of us with her camera. Then she wandered off. About ten minutes later we heard screaming." According to the statements obtained by locals, the perpetrators threw Sierra's telephone and iPad into the sea. Sierra had used both to take photographs that day of what could have been her murderers. Homicide Bureau detectives are now looking for these two items.

With Ziya Tasalı's flight risk into Syria, Turkey's Intelligence Department has now joined in on the case and is assisting in seeking out the suspect in Syria and the border area. Photographs of Tasalı have been widely distributed along the border.

Meanwhile, Atilla Elifoğlu, a water salesman whose photographs were mistakenly published as 'Laz Ziya', is filing a criminal complaint, claiming the release of these mistaken images has destroyed his life.

This is a translation of an article originally written by Emir Somer.