An exploration ship with hotel comforts 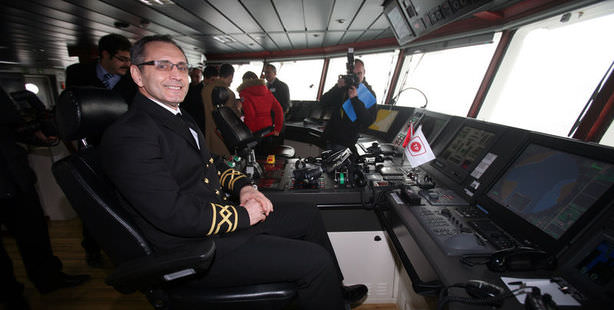 In addition to its superior technology, the Barbaros Hayrettin Paşa Seismic Exploration Ship also provides those on board with some of the commodities offered at the best hotels, including a gym, library and games room.

Captain Kazım Var is at the helm of the Barbaros Hayrettin Paşa, one of the top ten most highly advanced seismic oil exploration ships, which Turkey purchased for $130 million. Captain Var graduated from the Naval Academy in 1986 and began working on commercial ships. Expressing how proud he is to be steering Turkey's first-ever seismic exploration ship, Var stated, "This ship is able to follow any command given and can calculate the effects of something we may have no control over and remain stable. Hopefully, we will find petrol and gas as soon as possible in order to please our public."

Captain Kazım Var says that because they spend extended periods of time at sea, the ship needs to accommodate for all social needs of the 43 member crew from 18 different nations. Var says the ship has a fully-equipped gym and rooms for games such as darts and table football as well as an extensive library and film collection. According to Var, the cuisine on board is just as good as in a five-star hotel.