Erdoğan refers to Assad as the “mute devil” 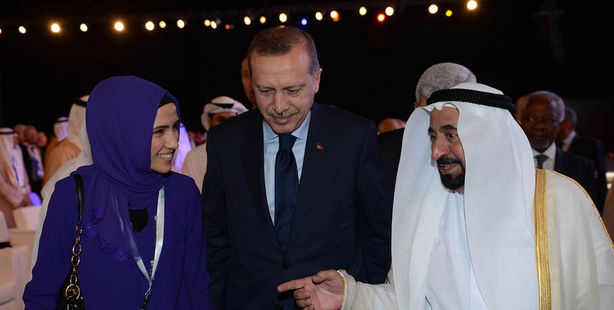 Speaking at the Sharjah Government Communication Forum in the United Arab Emirates, Prime Minister Erdoğan denounced Syrian President Assad by stating, “We will not remain silent in the face of Syria’s cruel dictator, the mute devil.”

Prime Minister Recep Tayyip Erdoğan was the guest of honor at the Second Sharjah Government Communication Forum held in the UAE on Sunday. Over 500 leading political, academic, media and communications figures, including United Nations Secretary-General Kofi Annan, attended the forum which focused on the development of government communication mechanisms in the region.

During his address on Sunday, Erdoğan denounced the Syrian President Bashar al-Assad by referring to him as a "mute devil" for carrying out attacks on his own people while turning a blind eye to Israeli occupation of Syrian territory.

"For us, saying things that you have not done or not doing the things you say you will is one of the greatest errors man can make, and it should be this way. However, it is also not enough to just say or do something; we must always keep in mind a fundamental principle. We will not remain silent in the face of Syria's cruel dictator, in other words the mute devil.

It is just as much our responsibility to say what is right as it is to raise our voice against injustice, and to correct this with our own hands and voice, and if not with our own hearts. Some may be extremely uncomfortable with us raising our voice on global issues. However, I want everyone to know that we will never be amongst those to remain silent as children and women's bodies fall lifeless in Palestine and Gaza in front of our very eyes," said Erdoğan as the audience responded with wide applause.

The following are a series of excerpts from Erdoğan's delivery at the Sharjah Communication Forum:
"We will not be the ones to remain silent as every day innocent children, women and the elderly are massacred in Syria. We will not remain silent in the face of Syria's cruel dictator, in other words, the mute devil, who mercilessly continues to massacre his own people however remains voiceless, silent and unresponsive to those who have occupied his own territories. We have never been one to bite our tongues when it comes to the starvation in Somalia, the poverty in Myanmar, the squalor in Afghanistan and the discord in Iraq.

Those who speak solely with their tongues will only ever be able to construct sentences using just the words they know. Those who only look through their eyes will only be able to see or look as far as the horizon. We are members of a civilization that speaks, touches and sees from their heart and therefore the horizon is no limit for us. We are responsible for standing up strong against this oppression and tyranny," said Erdoğan, who referred to those who do not acknowledge the violence in Gaza as blind and those who do not speak out against the bloodshed in Syria as voiceless.

"You cannot build a world and a future based on lies. If there is no sincerity, then there cannot be communication between anyone. The cell phones that we constantly hold in our hands and to our ears are simply toys if there is no communication. When we see the blood, bullets and bodies of lifeless children in Syria on the screen, if we are unable to see the pain, oppression and injustice and hear the screams and feel the heaviness in the air, then this means we are actually seeing nothing on that screen."

COMMUNICATION FROM THE HEART

Prime Minister Erdoğan also addressed the importance of communication, saying that just how it allows for the development of interpersonal relations, social lives, the economy and trade it also can be an influential factor in shaping a government. "Politicians who use communication tools in the correct, effective and appropriate time tend to be preferred by voters. Governments that are able to effectively utilize communication tools have an increased problem-solving capability and are able to establish a better connection with their people. However, I must also say that talking is still the number one tool when it comes to political communication," said Prime Minister Erdoğan who went on to say that as both the chairman of a leading political party and as prime minister, he has paid dozens of visits to each of the 81 provinces in this nation which spans 2,050 kilometers from Turkey's most western point to its farthest east. Erdoğan said he visited 70 provinces alone during the campaign period. "Despite the fact that we regularly use technological communication tools, talking and directly addressing the people has always been our number one form of communication," stated Erdoğan, emphasizing that communication is something that must be done from the heart.

Referring to any form of communication that does not come from the heart or is insincere as being lacking, Erdoğan said that the entire success of his government is due to the fact that they have always kept their lines of communication sincere. We have always addressed our nation as well as others with language that is sincere and from the heart. Communication should be a tool used to bring the government closer to the people. For religions, languages, races and beliefs to still divide people despite the existence of these tools of communication is in no way an advantageous development. We need to turn this around. In this globalizing world, we need to ensure that we also globalize justice, human values, solidarity and sharing," said Erdoğan.

A FLAG OF ROSES

During his stay in the United Arab Emirates, Prime Minister Tayyip Erdoğan had the opportunity to tour the Sharjah Museum of Islamic Civilization. Sharjah Emir Sheikh Sultan bin Mohamed Al-Qasimi told Erdoğan that he was inspired by the Grand Bazaar while conceiving the museum building. Prime Minister Erdoğan in return expressed how pleased he was to see so many artifacts in the museum depicting their shared civilization. Erdoğan also enjoyed viewing a cloak from the Kaaba and a hand written Koran as well as miniatures of Istanbul's Sultanahmet and Selimiye mosques.

From there, Erdoğan paid a visit to Ajmar Emir Humaid bin Rashid Al Nuaimi, who welcomed the Turkish Prime Minister by displaying with an extensive Turkish flag comprised entirely of roses. In the evening, Erdoğan was hosted by Sharjah Sheikh Al-Qasimi for a dinner after which the Prime Minister departed the UAE.