'We want a united humanitarian conscience' 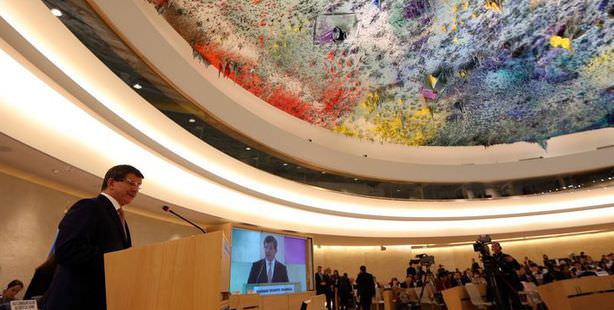 Addressing the U.N. Human Rights Council, Foreign Minister Ahmet Davutoğlu said that the situation in Syria has now become a true threat to regional peace and security and called on the UN to take action with a “united humanitarian conscience.”

During an address to the United Nations Human Rights Council (UNHRC) at the Alliance of Civilizations Hall, Foreign Minister Ahmet Davutoğlu emphatically pointed out that a humanitarian tragedy still continues to unfold in front of the very eyes of the international community. "At present, Syria has become a place where human violations are taken place at frightening levels," said Davutoğlu.

Foreign Minister Davutoğlu went on to state that the regime's forces in Syria continue to indiscriminately bomb cities. Missiles have even struck residential areas including hospitals and civilians as they wait in line in for bread, said Davutoğlu pointing out that the number of deaths that take place in a single month in Syria has now reached 5,000.

AS I SPEAK THEY ARE DYING

"While we speak here today nearly 200 more people have died in Syria. We are not just talking about statistics. Every number represents a person's life," said Davutoğlu. The foreign minister explained that nearly 20 oppositionists are killed in Syria daily as a result of systematic torture and noted that according to recent studies by the Syrian Human Rights Watch, a total 1,215 people have been killed as a result of systematic torture.

Emphasizing that Turkey is doing all that it can to shoulder a significant burden in this humanitarian tragedy, Davutoğlu said, "No matter how difficult the situation becomes, our open-door policy will continue and we will stand by our Syrian brothers and sisters."