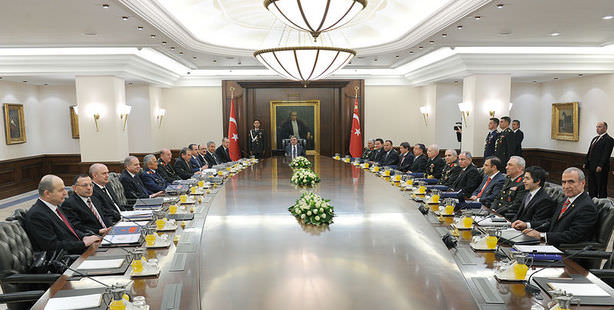 The February meeting of the National Security Council was held Tuesday in the capital. The two main items on Turkey’s agenda; the situation in Syria and the ongoing peace initiative were the focus of yesterday’s discussion.

Turkey's bi-monthly National Security Council (MGK) meeting was chaired by President Abdullah Gül and held in the Çankaya Palace on Tuesday. Top civilian and military officials participated in the five-and-a-half hour assembly which focused heavily on the situation in Syria, the fight against terrorism and the nation's overall security concerns.

In a statement released following the National Security Council meeting, it was stated that "While our fight against terrorism continues with determination, the council also discussed additional measures to ensure public safety." The MGK also handled the ongoing crisis in Syria and its effects on security and stability in Turkey as well as the greater region, the statement said noting that ongoing efforts to fulfill the needs of Syrian nationals in despair was also a topic on the agenda.

The statement released following the MGK meeting pointed out the diverse aspects of the latest developments in Turkey's neighboring region and stated, "Within this context we discussed the effects of Syria's ongoing crisis on the security and stability of the nation and the region. We have also evaluated the international efforts exerted to ensure the Syrian people's demands and expectations are fulfilled as soon as possible. We also discussed ongoing efforts to provide assistance and for the needs of the over 180,000 Syrian nationals that are being sheltered and hosted by our nation."

The concern expressed during the meeting over the increase in terrorism activities in Iraq was also mentioned in the statement, which said, "It was emphasized that in order for the strife experienced in Iraq during this political process to be brought to an end within a democratic and constitutional framework, it is not solely this nation's responsibility and that the entire region should also contribute to establishing peace and security in Iraq."

The statement released also noted that the council had the opportunity to discuss and evaluate the latest developments throughout the Middle East and North Africa.