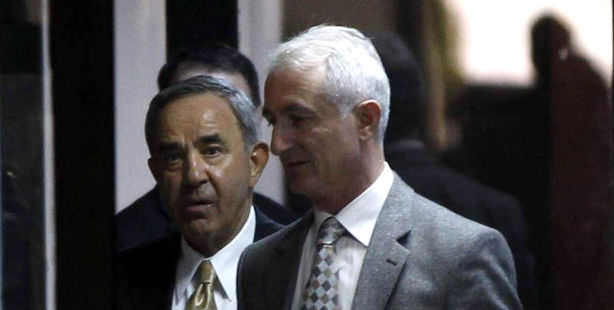 Ankara prosecutors referred five top commanders during the Feb.28,1997 military intervention, to the court for their arrest after they testified on their involvement in what is also known as the ‘postmodern’ coup. The court ruled to jail former Land Forces Commander retired General Erdal Ceylanoğlu and former Major General Yücel Özsır. Also called in to testify, the court released an active colonel and two other retired generals.

Just one day before the16th anniversary of the February 28, 1997 postmodern coup, the general said to be responsible for the symbolic release of tanks through the Sincan district in Ankara, former Land Forces Commander retired General Erdal Ceylanoğlu, was called in for questioning. Also summoned for his involvement in the 'postmodern coup' was former Deputy Chief of General Staff retired General Aslan Güner, who in an official ceremony in 2007 refused to shake hands with President Abdullah Gül's wife First Lady Hayrünnisa Gül. Three other prominent military members during the February 28th period; retired Air Force Intelligence Chief Major General Yücel Özsır, retired Major General Mehmet Başpınar and active Colonel Mehmet Cumhur Yanıkkaya, were also brought to an Ankara Courthouse to testify.

Ceylanoğlu is suspected of commandeering the maneuvering of tanks through the streets of Ankara in a move that was considered a threat to the government at the time, which was led by former Prime Minister Necmettin Erbakan. When asked who ordered the tanks to be driven through the city, Ceylanoğlu said the order came from the headquarters. "An order came in from the headquarters stating that the 'route should not be altered.' I then commandeered the tanks to move through the city," Ceylanoğlu is quoted as saying. After undergoing questioning by prosecutors, the five suspects were referred to the court on duty with a request for their arrest. The court ruled in favor of detaining Ceylanoğlu and Özsır and released Güner, Başpınar and Yatıkkaya on probation.

"DID YOU RECEIVE DIRECTIVES?"

Yesterday was the 12th wave of arrests in the investigation into the February 28th, 1997 coup. In this latest wave of arrests, the Ankara Chief Public Prosecutor called in the commanders of an April 7, 1997 meeting of the West Study Group (BÇG) held to discuss 'extremist activities'.

On February 28th, 1997 the military-dominated National Security Council issued a stern warning to Prime Minister Necmettin Erbakan, who pioneered Islamist politics in Turkey, accusing his government of policies undermining the secular constitution. Commentators dubbed the episode Turkey's "post-modern coup" as the generals used pressure behind the scenes to force Erbakan to resign four months later, rather than the direct intervention employed in three outright coups in 1960, 1971 and 1980.

On February 4, 1997 military tanks rolled through the Sincan district of the capital. The incident, in which retired General Erdal Ceylanoğlu is assumed to have been involved, was considered to be a show of force by the military directed at the Erbakan-led government.

"It is well understood that at that time, the Prime Minister and Deputy Prime Minister as well as a number of other cabinet members considered this move to be the forerun to military intervention. A majority of the public also perceived the rolling of tanks through the city as being a move staged against the government," stated Prosecutor Mustafa Bilgili who supposedly then asked Ceylanoğlu, "Did you give or receive orders for the tanks to move through the city? Why were the tanks driven through the city rather than on their regular route? Was this an act by the West Study Group?"

According to the information obtained, Ceylanoğlu responded by stating the following, "I was on leave at that time. When I heard about the incident on the news I went to the division. I did not issue any orders or directives for the tanks to be moved through the city. After the tanks had gone out, Doğu Pasha ordered them to be brought back in. He said, 'Bring the tanks back without altering their course.' He gave the order to follow the route through the city center in Etmesgut over his cell phone. Under his directives, the tanks turned back from Akıncılar at 15:30. By 17:00, they had returned to the division. The maneuvering of the tanks was not at all an act against the government."

Erol Aras, attorney for former Land Forces Commander Ceylanoğlu spoke to reporters after the court ruled to detain the retired general and said, "All they provided during questioning were headline articles from 15 or so newspapers. They didn't say anything different than what was written in the newspapers at the time. The names of the individuals who gave the orders are obvious. We will be making an appeal," stated Aras.

Retired General Aslan Güner, who served as the Chief of the General Staff Education and Organization Department was called in to provide a statement regarding his attendance of the 1997 meeting held in the General Staff Headquarters. In 2007, Güner, who was amongst the protocol waiting to greet President Gül from a trip to the Turkish Republic of Northern Cyprus, backed out in order to not have to shake Hayrünnisa Gül's hand. Güner, who served as Deputy Chief of Staff, is also stated to have illegally phone-tapped 2,000 people under the premise that he would be solely tapping PKK members.

The indictment in the Ankara District Attorney's probe on the 16-year-old February 28th military intervention, which has been dubbed the 'post modern coup', is said to be nearly complete. The investigation began when Ankara Bar Association attorney Yunus Akyol, filed a criminal complaint in 2011, that Turkey's 54th government which consisted of a coalition between Erbakan's Welfare (Refah) Party and the True Path (Doğru Yol )Party were forced to resign as a result on the February 28, 1997 coup. Yesterday's arrests were the 12th wave of operations, the first of which took place on April 12, 2012. There have been 73 arrests thus far, including Deputy Chief of General Staff Çevik Bir, retired generals Teoman Koman, Çetin Doğan and Şükrü Sarıışık and former Higher Education Board Chairman Prof. Dr. Gürüz. Then-Chief of General Staff İsmail Hakkı Karadayı was also arrested in the 11th wave of operation however was subsequently released on bail.