Demirel played a leading role in the February 28 coup 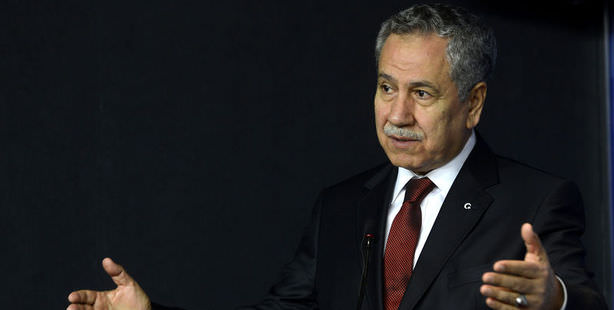 Deputy Prime Minister Bülent Arınç said that during the February 28th era they expected an all-out coup to break out on June 12th. “Demirel contributed significantly in all of this to get the government’s resignation,” said Arınç.

Speaking at a panel entitled "A 1,000-Year Coup: February 28th" held by the Foundation for Political, Economic and Social Research (SETA), Deputy Prime Minister Bülent Arınç shared his experience in 1997.

"Some said the Feb.28th coup would last a thousand years, but that didn't happen," said Arınç, who went on to mention that it was the second anniversary of then-Prime Minister Necmettin Erbakan's death. Referring to Erbakan as the true victim of the Feb. 28th era, Arınç said that at the time a sense of paranoia developed surrounding religious fundamentalism. "Many illegalities were committed at that time in order to bring the Welfare (Refah) Party down, to ensure Erbakan stepped down and to secure a return to the past."

Arınç said that at that time, professional organizations, the judiciary, universities and the media attempted to create artificial tension. "During this tense environment, Süleyman Demirel undoubtedly contributed significantly as the leading actor in all of this to ensure the government resigned," stated Arınç.

On February 28, 1997 the military-dominated National Security Council issued a stern warning to Prime Minister Necmettin Erbakan, accusing his government of policies undermining the secular constitution. Commentators dubbed the episode Turkey's "post-modern coup" as the generals used pressure behind the scenes to force Erbakan to resign four months later. Demirel was the president at that time. He is being accused of turning a blind eye to the illegal West Study Group (BÇG) within the military which would categorize politicians, bureaucrats, intellectuals and soldiers according to their religious and ideological backgrounds.

"WE HAVE SEEN MANY DARK DAYS"

As a witness to that era, Arınç said: "I must say we experienced many dark days amongst ourselves where we were sad and anxious. We were staying in lodging at the time. In June of 1997, everyone was saying there would be a coup. I seem to remember the date as being June 12. A number of parliamentary deputies, however none from the Welfare Party, but at least sixty from DYP (True Path Party) went abroad. We didn't move. We said, 'we have come to power by the trust of our nation and we will not entrust that trust to anybody else.' God did not let us down. On June 18th, Erbakan offered his resignation and somehow that era has since come to an end," said Arınç.

Reminding that the perpetrators and those that acted as accessories to the Feb. 28th coup are now being held accountable by the judiciary, Arınç said, "The fact that this event is even being discussed pleases me greatly. No matter what decision the courts make, if today, February 28th has become an era to condemn, then I believe that this in itself is the most significant incident to show that Turkey's horizon has opened."

Noting that incidents in the same vein as Feb. 28 have continued, Arınç told the audience, "As far as I know and have seen, there have been a number of events that have transpired that were similar to Feb. 28 ever since the AK Party came into power. These attempts however were unsuccessful and all have failed." Deputy Prime Minister Arınç also said that the government was currently working on drafting new legislation regarding the numerous foundations that were shut down during the Feb. 28 era for fabricated reasons. "If we receive applications by founding members of these foundations, which were forced to shut down during that era, we will reopen the foundation and will return all of their previously confiscated assets," said Arınç.