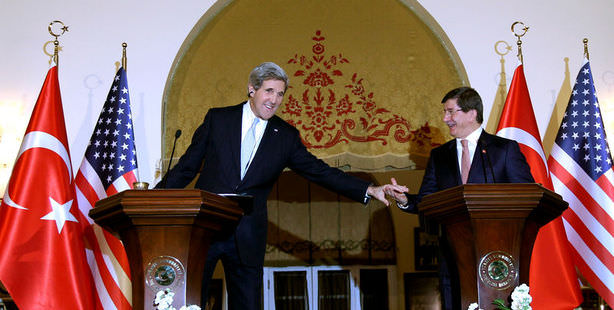 In a joint press conference with Foreign Minister Ahmet Davutoğlu, U.S Secretary of State John Kerry urged for ties between Turkey and Israel to be restored and called Prime Minister Erdoğan’s recent remark in which he likened Zionism to crimes against humanity “objectionable.”

U.S. Secretary of State John Kerry said on Friday the United States found a comment by Prime Minister Tayyip Erdoğan, likening Zionism to crimes against humanity, "objectionable", overshadowing their talks on the crisis in neighboring Syria.

Kerry, on his first international tour since taking office, met with Foreign Minister Ahmet Davutoğlu after which they held a joint press conference. Commenting on a remark by Prime Minister Erdoğan at the U.N. Alliance of Civilizations meeting in Vienna on Wednesday, when he stated: "Just as with Zionism, anti-Semitism and fascism, it has become necessary to view Islamophobia as a crime against humanity," Kerry said, "We not only disagree with it, we found it objectionable."

Kerry said Turkey and Israel were both key U.S. allies and urged them to restore closer ties. "Given the many challenges that the neighborhood faces, it is essential that both Turkey and Israel find a way to take steps in order to bring about or to rekindle their historic cooperation," Kerry said. "I think that's possible but obviously we have to get beyond the kind of rhetoric that we've just seen recently."

Ties between Turkey and Israel unraveled in 2010, when Israeli marines killed nine Turks aboard a Palestinian aid ship. "If we must talk about hostile acts, then Israel's attitude and its brutal killing of nine of our civilian citizens in international waters may be called hostile," Davutoğlu said, adding Turkey had always stood against anti-Semitism.

"No single statement carries a price higher than the blood of a person ... If Israel wants to hear positive statements from Turkey it needs to reconsider its attitude both towards us and towards the West Bank," he told the news conference.

Kerry thanks Turkey for its support for Syrian refugees

U.S. Secretary of State John Kerry thanked Turkey for hosting hundreds of thousands of Syrian forced to flee their country due to the ongoing violence. Kerry said that the US and Turkey "both believe the first priority is to try and have a political solution. We would like to save lives, not see them caught up in a continuing war". Foreign Minister Davutoğlu said Turkey's main objective was to "protect the innocent civilians of Syria".

"We stand for a political solution in Syria and to provide those people security that they deserve. Minister Davutoğlu and I, along with our partners, both believe there is no legitimacy of the regime. We need to continue to work to make certain that the Assad regime makes different choices," said Kerry.

Kerry also said that although this was a short trip he was pleased to be back in Turkey. The U.S. Secretary of State also mentioned that earlier in the day he attended a memorial service for Mustafa Akarsu, the Turkish security guard who was killed in the suicide bombing on the U.S. Embassy in Ankara in early February. Kerry said Akarsu was a brave man who lost his life saving others. Kerry also emphasized U.S. support for Turkey's fight against terrorism.

In reference to economic relations, Kerry said they would like to increase the trade volume between the two nations. "Through a number of bilateral dialogues, our governments are taking concrete steps in order to increase trade and investment. Thanks to those efforts, we have now established 20 billion dollars trade relationship and we are eager to grow it further. All of us keep pushing the limits on finding clear ways to bring prosperity to our populations," he said.