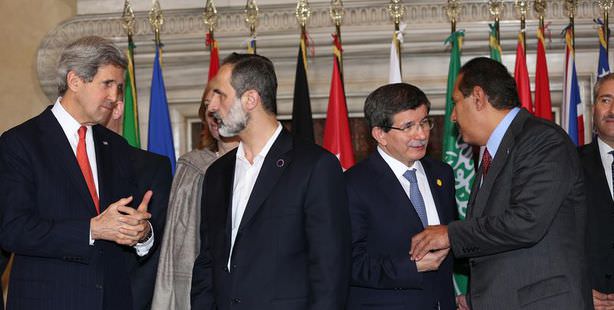 The Friends of Syria Group summit held in Rome on Thursday reaped a compromise on three specific issues pertaining to the ongoing conflict in Syria: the Syrian public’s defense should be strengthened; the humanitarian aid corridor completed and scuds considered a war crime.

Representatives from 11 nations, considered to be the 'core' of the Friends of Syria Group, met in Rome on Thursday, where they reached three critical decisions regarding support for the opposition, establishing a humanitarian aid corridor and announcing the scuds fired in residential areas by the Assad regime to be illegal.

The meeting, held at the Italian Foreign Ministry residence Villa Madama, was attended by representatives from the United States, England, France, Germany, Turkey, Egypt, UAE, Qatar, Jordan and Saudi Arabia. Turkey was represented by Foreign Minister Ahmet Davutoğlu. The first session of yesterday's meeting saw nation representatives and other officials convening, while in the second session; Syrian National Coalition President Mouaz al-Khatib led a delegation of members from the Syrian Opposition and National Coalition for Syrian Revolutionary and Opposition Forces. Yesterday's summit was considered as having laid the groundwork for the upcoming Friends of Syria Group meeting scheduled later this month in Rome and anticipating wide participation.

Speaking at a press conference held at the Rome Embassy following the summit, Foreign Minister Ahmet Davutoğlu announced that during the meeting a consensus was reached on three main issues; first, to putting an end to the humanitarian tragedy in Syria, secondly, on preventing the crisis from transpiring into a regional one, and third, displaying a clear and decisive stance against radical waves and the possible use of chemical weapons.

Davutoğlu also announced that three important decisions were agreed upon at the summit. Participants agreed to "coordinate their efforts closely so as to best empower the Syrian people and support the Supreme Military Command of the (rebel) Free Syrian Army in its efforts to help them exercise self-defense". A decision was reached to begin working on the technical aspects of establishing a humanitarian aid corridor. It was also officially recorded that setting off scud missiles inr esidential areas would be considered a war crime. "A regime that fires scud missiles from one city to another cannot be said to be fighting against terrorism. What reasoning makes this acceptable? There is a crime being committed. A decision was reached to immediately begin an initiative into banning the firing of scud missiles in residential areas," stated Davutoğlu.

The evening prior, Davutoğlu attended an unofficial transatlantic meeting of NATO and EU members. Newly appointed U.S. Secretary of State John Kerry was also in attendance. Davutoğlu and Kerry discussed the latter's trip to Turkey which begins with a series of meetings in Ankara today. U.S. Secretary of State Kerry also relayed information on a meeting he held shortly prior with Russian Foreign Minister Sergey Lavrov. Noting that the Arab League is scheduled to meet on March 6th in Cairo, Kerry said they are expecting decisions to be reached on taking further concrete steps to put an end to the crisis in Syria.

Explaining that his acquaintance with Kerry spans back to when he was Chief Advisor to the Prime Minister, Davutoğlu said, "We also spoke on the telephone for over 40 minutes and discussed regional issues the day he began his duty as Secretary of State. Therefore, we don't need a warm-up tour to get to know each other," said Davutoğlu.

As the Friends of Syria Group meeting in Rome came to a close, news surfaced that the Syrian Opposition and National Coalition for Syrian Revolutionary and Opposition Forces had decided to postpone tomorrow's meeting in Istanbul to choose a prime minister to lead a provisional government that would oversee liberated regions in Syria.

According to diplomatic sources, there are four main reasons behind the Syrian opposition's choice to postpone the meeting. First and foremost, the international community is not keen on the notion of a "Government-in-Exile" being established before the Syrian opposition has gained control of a specific region they can establish authority in. U.S. Secretary of State John Kerry is working on a new plan to distribute aid directly to the Syrian opposition as announced in Rome. New and concrete decisions are anticipated to surface in the March 6th Arab League meeting to be held in Cairo. Meanwhile, the objective is also to persuade Russia to agree to the notion of setting up a humanitarian aid corridor.