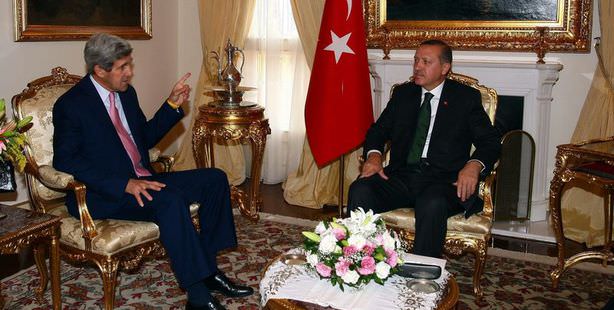 Prime Minister Tayyip Erdoğan hosted U.S. Secretary John Kerry, who arrived in Ankara yesterday, for a meeting later in the day. The meeting, which was also attended by Foreign Minister Ahmet Davutoğlu, took place at the Prime Ministry Official Residence and lasted two hours and 15 minutes.

A GIFT OF A PHOTOGRAPH

President Abdullah Gül also hosted Kerry yesterday at the Çankaya Palace. At the start of the meeting, which took place in a warm and friendly atmosphere, President Gül showed Kerry a photograph taken in 2008 when U.S. Vice President Joe Biden, new Defense Secretary Chuck Hagel and Kerry paid a visit to Ankara.