Peshmerga to accompany the PKK’s withdrawal from Turkey 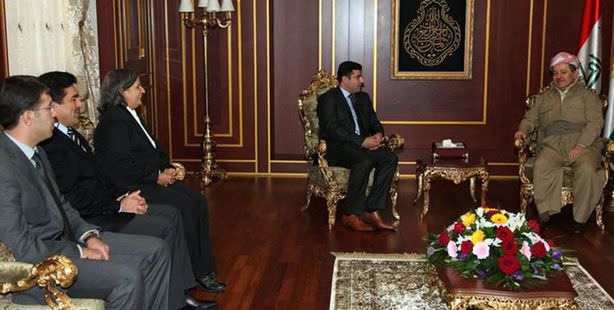 While the PKK’s European wing has responded affirmatively to the three-stage solution process proposed by PKK leader Öcalan; withdrawal, relinquishing weapons and full democracy and normalization, the terrorist organization’s faction in Kandil has delivered the message they are still ‘deliberating’ the plan.

Arbil will be taking on an active role in the PKK's withdrawal from Turkey's borders, the first stage in the solution process. While Arbil will be collaborating closely with Turkey during the ongoing process, the Peshmerga will be assisting the PKK terrorist organization withdraw from Turkey. Iraqi President Jalal Talabani's Patriotic Union of Kurdistan (PUK) and Regional Administration leader Massoud Barzani's Kurdistan Democratic Party (KDP) were influential in ensuring the committee's meetings transpired in a confidential, safe and secure venue. The PKK's leaders in Kandil, Murat Karayılan and Duran Kalkan, were also present for the talks. The delegation later returned to Arbil, where the Kurdish administration accepted a request to assist in the PKK's withdrawal from Turkish borders.

While acting PKK leader Murat Karayılan has yet to make an official announcement regarding the ongoing process, Sülbüs Peri, one of the organization's female administrators made an announcement as the meeting between the BDP and PKK leaders were still ongoing, stating, "A one-sided ceasefire or withdrawal is not possible. Without ensuring some sort of security and before the other side has taken a step, this won't be possible."

In a press announcement from Arbil on Saturday, BDP Co-chair Gültan Kışanak announced that the public officials being held captive by the PKK could be freed within the next ten days.

This is a translation of an article originally written by Hazal Ates.