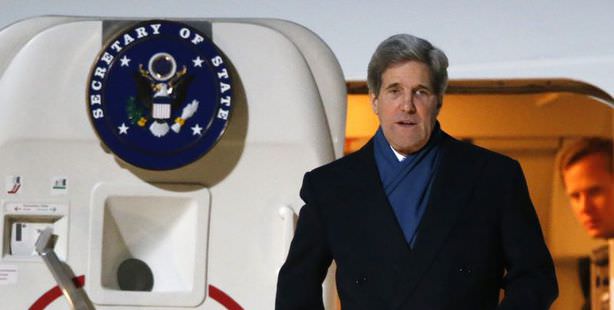 During a two-day trip to Turkey, U.S. Secretary of State John Kerry vowed to be more influential when it comes to Syria. Referring to Erdoğan’s “Zionism” comment, Kerry said “Turkey and Israel are key allies.”

U.S. Secretary of State John Kerry's first trip to Ankara in an official capacity began with a consensus reached on Syria and divergence of opinions when it comes to Israel. After meeting with Foreign Minister Ahmet Davutoğlu on Friday, Kerry attended a joint press conference with his Turkish counterpart.
Kerry also said that both Turkey and Israel were indispensable for the U.S. and stated, "Given the many challenges that the neighborhood faces, it is essential that both Turkey and Israel find a way to take steps to rekindle their historic cooperation," Kerry said.

The first meeting held between the two foreign ministers in Ankara was held at the Ankara Palace. Kerry began the meeting by commenting on Prime Minister Erdoğan's remark made at a recent U.N. Alliance of Civilizations meeting likening Zionism to crimes against humanity. Kerry vowed the U.S. would play a more active role in the Middle East peace process. Davutoğlu on the other hand said Turkey was ready to contribute to find a solution to establish the 1967 borders. In economy, Kerry also solidified Turkey's inclusion in the USA-EU Transatlantic Cooperation.

Urging Turkey and Israel to mend ties, U.S. Secretary of State Kerry said, "given the many challenges that the neighborhood faces, it is essential that both Turkey and Israel find a way to take steps to rekindle their historic cooperation," Kerry said. "I think that's possible but obviously we have to get beyond the kind of rhetoric that we've just seen recently."

Davutoğlu responded by saying, "We gave Israel the opportunity to change its stance. However instead of rectifying the situation, over the past two-and-a-half to three years they have persisted in attempting to legitimize their hostile actions. What crime did our nine citizens commit? The Turks' friendship is strong as is their reactions to attacks."

Davutoğlu requested a humanitarian aid corridor be established for Syria and for the regime to halt attacks on civilian residential areas. Both ministers expressed their shared views that Assad has lost all legitimacy. Kerry vowed to be more influential in reaching a solution and made three promises for U.S. support.

The U.S. will take action to ensure humanitarian aid reaches the region it is most needed. The U.S. will also be increasing all non-lethal aid.

The U.S. finds it unacceptable for Syria to shoot scud missiles or use chemical arfare on the Syrian public.

The U.S. will help carry the burden which has been taken on by neighboring countries to Syria.

While speaking during the Q & A session of the news conference, Davutoğlu noticed that Kerry was listening to his response without an ear piece. The Turkish foreign minister jokingly turned to his U.S. counterpart to say, "I think you can understand Turkish," warning him in jest. Kerry responded by stating that he heard a lot of Turkish spoken recently and he has become accustomed to it. "We are communicating with our minds and not our languages," said Kerry. As Kerry put on his ear piece, Davutoğlu said, "I do believe that Kerry's Turkish will develop over time."

Kerry and Davutoğlu participated in a meeting with mutual foreign ministry undersecretaries and ambassadors after which they moved on to dinner. During the meal, Kerry directed question after question on Syria to his Turkish counterpart and said, "I came to Turkey to listen to you." By the time Kerry had finished his meal, Davutoğlu had yet to even touch his. Upon which, Kerry said, "You talked a lot and didn't have a chance to eat. But we need you. Now, let me talk a little and you eat your dinner," bringing the delegation to laughter.

'MUSTAFA LOST HIS LIFE TO SAVE OURS'

A memorial ceremony was held yesterday on the one month anniversary of the Feb. 1st bombing of the U.S. Embassy in Ankara for Mustafa Akarsu, the Turkish security guard who lost his life in the suicide blast. During the ceremony, Kerry presented Akarsu's family with the "Thomas Jefferson Star" medallion. Kerry also offered condolences by President Obama and said, "Mustafa lost his life saving others. He was a man who had dreams. He wanted to have the opportunity to educate his children in America. Mustafa was so intent on his plans, that his friends nicknamed him the "half-American". It is our duty to ensure we fulfill that dream, said Kerry, who offered his condolences to Akarsu's wife Yasemin Akarsu.