German soldier was not struck by Turkish military 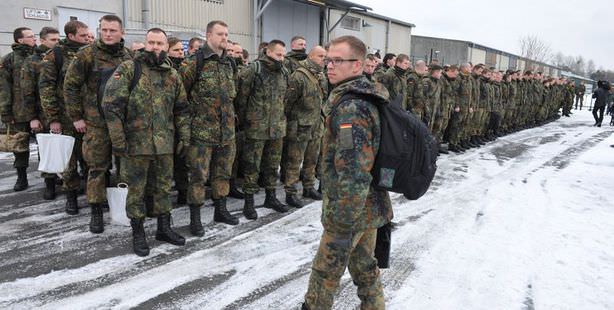 The Turkish General Staff has released a statement stating that not only have they not received a single complaint or demand from the German soldiers stationed in Kahramanmaraş, when German Chancellor Merkel and the Ministry of Defense visited the deployment, they praised the Turkish troops for their support offered to the German personnel overseeing the operation of the Patriot anti-missile defense systems.

The announcement, published on the General Staff website was referring to allegations that have surfaced in the German press that German soldiers deployed in Turkey to oversee the operations of the Patriot battery systems deployed to Turkey through NATO in order to protect the border with Syria are experiencing, poor treatment, contention and serious tension with their Turkish counterparts.

The General Staff statement read, "Not only have we not received a single complaint or demand from the German soldiers stationed in Kahramanmaraş, when German Chancellor Merkel and the Ministry of Defense visited the deployment, they praised the Turkish troops for their support offered to the German personnel."

According to a report by Germany's Parliamentary Commissioner for the Armed Forces Hellmut Königshaus, German soldiers are feeling like an "unwanted guest" in their deployment to Kahramanmaras. Königshaus presented his report, which alleges that cooperation between Turkish and German soldiers is "primarily problematic," just a few days after visiting the German soldiers stationed in Turkey.

The report claims that overall, the German soldiers feel like "an unwanted guest" and mentions an incident in which a female German soldier was supposedly pushed by a Turkish general while she was trying to organize the arrival of a convoy of vehicles transporting German Defense Minister Thomas de Maiziere and his delegation. The female German soldier has complained of bruising as a result of the incident.

Königshaus' report also claims that the sanitary conditions of the lavatories used by the troops are "unacceptable" and notes that German soldiers have also complained of delayed postal services. The report adds that carrying weapons is forbidden onsite and therefore soldiers are asking how they are going to defend themselves.

The overall claims that have surfaced are that the Turkish military is supposedly intentionally making conditions difficult for the German soldiers deployed, which feel they are being subjected to mistreatment.

German Defense Minister Thomas de Maiziere has promised better conditions for the German soldiers deployed. Noting that the location where the soldiers are stationed is not equipped for this magnitude of troops, Maiziere stated, "Turkey has gone to great lengths to provide good accommodation." Maiziere added that they are working on setting up new barracks soon, at which point a number of these issues will be eradicated he said.