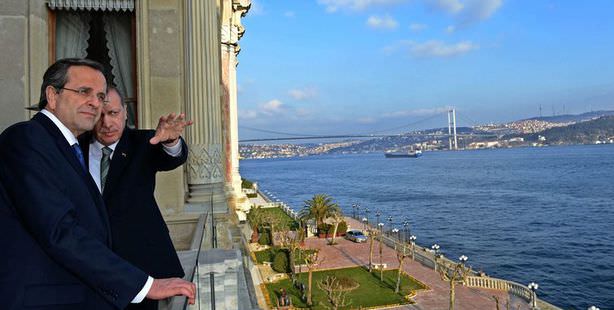 Greek Prime Minister Antonis Samaras was joined by 12 Greek ministers, including Foreign Minister Dimitris Avramopulos for an official trip to Istanbul yesterday. The overriding sentiment expressed during the Greek prime minister's stay was for both neighboring nations to exhibit joint volition in cooperation in all areas.

Samaras began his trip by paying a visit to President Abdullah Gül in the Tarabya Palace. The meeting was also attended by EU Minister Egemen Bağış, Foreign Minister Ahmet Davutoğlu and his Greek counterpart Dimitris Avramopulos. During the meeting, President Gül expressed his hopes that as Turkey and Greek relations continue to further strengthen, the Northern Mediterranean will one day represent a pillar of peace, stability and friendship in the European Union.

Later, Prime Minister Samaras moved on to the Prime Ministry Office in Dolmabahçe, where he was greeted by Prime Minister Tayyip Erdoğan. Following a one-and-a-half hour meeting between the two leaders, a second meeting was held between bilateral committees after which Erdoğan and Samaras participated in a joint press conference.

Prime Minister Erdoğan told reporters that 25 agreements had been signed during this trip in addition to the 22 signed during their first meeting. Erdoğan told reporters, "I want to define the strongest tie of the friendly cooperation between our countries as being a bridge of camaraderie. Our kin in Western Thrace and our citizens of Greek origin residing in Turkey are a representation of this bridge of camaraderie between our nations," said Erdoğan, who went on to express that the prosperous and happy existence of minorities in both nations will only further strengthen their bilateral friendship.

'WE ARE BUILDING TRUST'

In response to a question regarding terrorist camps in Greece, Prime Minister Erdoğan said, "The fight against terrorism is all of our joint problem. Greece is a country that has experienced significant difficulties in the past due to terrorism. Our related ministries will be in closer contact on the issue. Our Interior Ministers as well as our Foreign Ministries and police departments will be furthering collaboration and we will be taking joint steps against terrorism. As for economic areas, we also discussed collective efforts we can embark on. We also shared the sentiment that these steps need to be taken in the Eastern Mediterranean, on a win-win basis," stated Erdoğan.

Greek Prime Minister Antonis Samaras expressed his gratitude for the Turkish hospitality shown to him and said that they held a productive meeting. "Through careful steps, we are building trust. We are further developing mutual relations. This is symbolic and shows that Turks and Greeks have the capability to sit at the same table in order to reach a joint path," said Samaras.

One of the issues that made a mark on the meeting was the presence of terrorist camps in Greece. Recently in Qatar, Erdoğan requested Samaras shut down the terrorist camps in Greece and for the nation to extradite terrorists. However, at that time, Greece refuted the existence of said camps. According to the information obtained, during the meeting on Monday, Erdoğan provided Samaras with the names of the terrorists who have received training at the Lavrion camp as well as footage of the training center and detailed information on high-level terrorist leaders. Erdoğan also shared footage of the terrorist who staged the February 1st suicide bombing on the U.S. Embassy in Ankara receiving training at the Lavrion Camp. Erdoğan reiterated his request for the camp's closure as well as for the extradition of terrorists to Turkey.

Erdoğan also mentioned the situation in Cyprus by stating, "We want to overcome the problems regarding Cyprus and bury the issue in history."

This is a translation of an article originally written by Stelyo Berberakis, Duygu Güvenç and Mesut Er.