Police arrest the 'nightmare' of Samatya 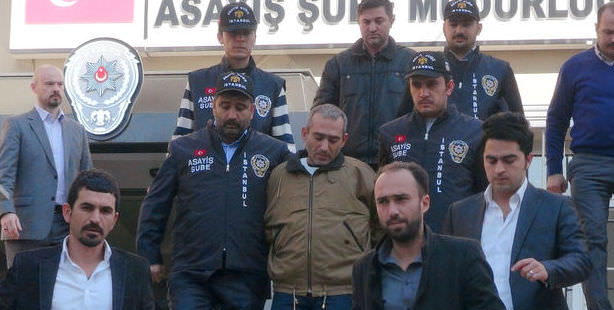 Police have apprehended Murat Nazaryan, a man of Armenian heritage who is accused of having attacked five elderly women, three of which were Armenian, and killing one. Blood found on an envelope in a purse belonging to Maritsa Küçük, the woman murdered by Nazaryan, is what led to his arrest.

Murat Nazaryan, the prime suspect in a series of attacks on five elderly women, three of which were Armenian, and the murder of 87-year-old Maritsa Küçük in Samatya was apprehended in Istanbul's Fatih district by police four months after the crimes were committed.

The serial attacks, which became a source of nightmares for Samatya residents, all began on November 1, 2012 with an attack on Fatih resident Gönül A. A second attack took place on November 28th, when 87-year-old Fatih resident Tuivant A. was assaulted at knife-point and robbed of her valuables. On December 17, 80-year-old Vehbiye Ö. was robbed and stabbed in the neck in her home in Şişli by a man who said he was an electrician. On December 28, 87-year-old Maritsa Küçük was stabbed to death and robbed in her home in Samatya. The final attack also took place in Samatya, when 83-year-old Sultan A. was wounded in a knife attack.

Police were able to determine that the attacks were staged by the same perpetrator, who they identified through witnesses and security camera footage. In order to catch the assailant, 155 Security Teams, 55 official and 25 motorcycle police and 20 homicide detectives were assigned to the case.
Prime suspect 38-year-old Murat Nazaryan was apprehended by police at the Birlik Pansiyon in Vefa. Nazaryan, who has been working at the hostel he was detained at for the past month has a criminal record with two counts of theft. Police matched a blood sample found on an envelope in murder victim Küçük's purse to Nazaryan, which led to the arrest.

Initially Nazaryan denied the allegations against him, however he then admitted to the crime when police showed him the evidence they had against him. While evidence points to Nazaryan in four of the assaults, an eye-witness of the attack on Sultan A. also positively identified Nazaryan. After undergoing questioning, Nazaryan was transferred to the Istanbul Courthouse where he was put under arrest for voluntary manslaughter. When asked why he staged the attacks on people of his own heritage, Nazaryan responded by stating "I don't remember".

HE WAS WORKING IN A HOSTEL IN FATIH

Owner of the hostel where Nazaryan was employed, K.A. says he has known the assailant for nearly two years now. "I knew he didn't have any money, so I said to him, 'There is a room in the basement where you can stay.' I then told him that he could work at my tea house. I was paying him 20 liras in daily wages. Last Saturday, police arrived and showed me a sketch of the suspect. When I saw the police sketch, I thought it resembled Murat and that's what I told the police. They detained Murat and summoned me to the police department. While Murat was with the police I asked him, 'Son, did you kill her?' He responded by saying, 'I don't remember'. I was shocked. He had started praying recently. He didn't seem like someone who could have committed those crimes," said K.A.

An individual staying at the hostel, who wanted to remain anonymous, said that they knew Nazaryan for awhile now. "He doesn't have any close family or loved ones. He is of Armenian heritage and supposedly has wealthy relatives; however they haven't looked after him," said the individual.

This is a translation of an article originally written by Emir Somer and Ali Şahin.