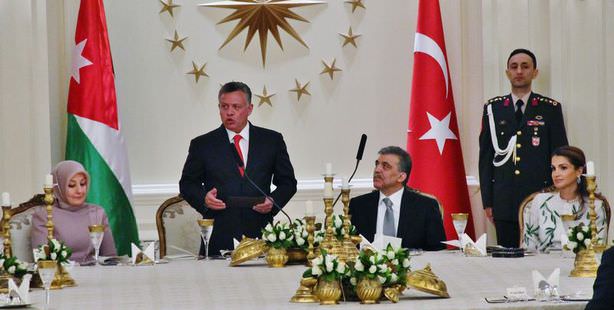 Visiting Ankara on Tuesday for the start of a two-day official trip to Turkey, Jordanian King Abdullah and President Abdullah Gül held a bilateral meeting focused on regional developments, followed by a joint press conference.

In a joint press conference President Abdullah Gül said that King Abdullah II's visit comes at a time of important developments in the Middle East and North Africa. "Within this framework the situation in Syria is of critical importance", said Gül emphasizing that this issue and other regional developments were the focus of yesterday's meeting.

"There are a significant number of Syrians staying in both Turkey and Jordan. Jordan is currently hosting over 300,000 Syrian guests. As you know, we are sheltering over 180,000. We widely discussed all of these issues concerning our region," said Gül.

During the news conference, King Abdullah also mentioned the role that Turkey and Jordan have taken on in the Syria crisis. "There is a tremendous burden on both our nations and one that we will continue to shoulder. Both nations will continue to offer the Syrian public all of the support that we can."

King Abdullah also called on the international community to provide assistance to Turkey, Jordan and Lebanon, the three countries hosting the highest number of Syrian refugees.

During a dinner held for King Abdullah, President Gül said that the relations they have founded built on the ancient camaraderie between the Turkish and Jordanian publics has now been crowned by King Abdullah's visit.