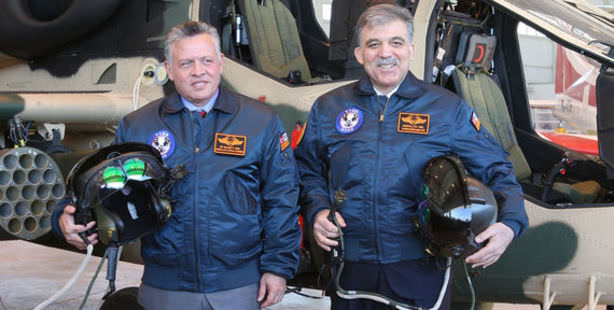 While in Ankara on a two-day official trip to Turkey, Jordanian King Abdullah II Ibn Al-Hussein was joined by President Abdullah Gül on a tour of the Turkish Aerospace Industry Corporation (TAI) to see the latest productions in Turkey's leading defense industry firms on Wednesday.

President Gül and King Abdullah II were presented with specially-made bomber jackets which they wore and then boarded the cockpit of the attack helicopter. King Abdullah II, who is also an avid flyer, took the pilot's seat while President Gül sat in the front section designated for weapons operators. Later the two namesakes donned night vision helmets specially-designed for the 'ATAK' project and posed for the press.

During the tour of TAI, King Abdullah II was presented with a photograph taken of his father, former President Kenan Evren and late Prime Minister Turgut Özal, during a tour of TAI by King Hussein in the 1980's. Meanwhile, President Gül allocated the Mercedes brand limousine he first rode in for October 29 Republic Day celebrations last year to King Abdullah during his stay.