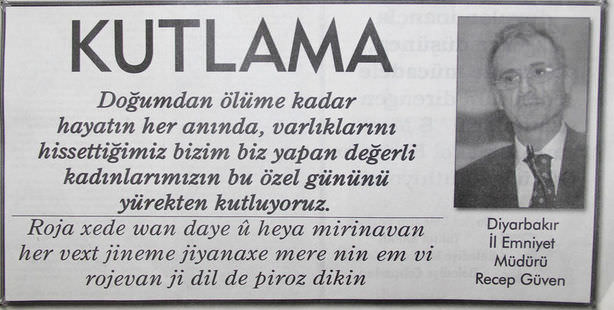 An announcement celebrating March 8th Women’s Day written in both Kurdish and Turkish by Diyarbakır Chief of Police Recep Güven was published in a local Diyarbakır newspaper on Friday.

A police chief in Diyarbakır released an announcement celebrating Women's Day that was published in both Turkish and Kurdish in the local Güneydoğu Güncel newspaper. The move, which was the first of its kind, was done by Police Chief Recep Güven, who was transferred to Diyarbakır from Siirt four months ago. Güven, who is fluent in Kurdish, is known for having made the controversial statement, "If you don't cry for the terrorists killed in the mountains, then you aren't human."

Recep Güven, who learned to speak Kurdish after years of service in the region and uses the language to communicate with citizens of Kurdish heritage, stated the following in a statement published in both Turkish and Kurdish for March 8th Women's Day which read: "I celebrate this special day devoted to the valuable women who make us who we are and whose presence we feel at every moment from our birth until our deaths." The announcement, published in black and white and in newspaper print, presented the statement in both Turkish and Kurdish.

Güven's infamous statement in which he said, "If you don't cry for the terrorists killed in the mountains, then you aren't human," was subject to investigation at the time, however in the end the courts reached a verdict of non-prosecution. Meanwhile, the Department of Police has begun to offer a Kurdish language course for 90 police officers.