U.S. Ambassador: We will be contending against atheist fanatics such as the DHKP-C 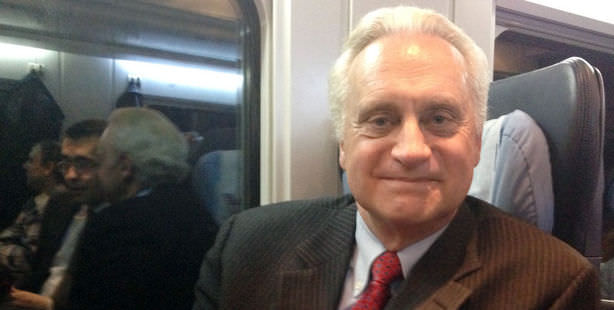 Commenting on Turkey-U.S. relations while aboard a high-speed train travelling between Ankara and Eskişehir at a speed 247 kilometers, U.S. Ambassador Ricciardone said "our relations are progressing even faster than this train.” The U.S. ambassador also used the term “atheist fanatics” in reference to the DHKP-C, the far-left Revolutionary People's Liberation Front which was responsible for the Feb. 2nd attack on the U.S. Embassy in Ankara.

United States Ambassador to Ankara Francis Ricciardone spoke to an ATV reporter while aboard the high-speed Ankara- Eskişehir train over the weekend. While travelling on the 247-kilometer-speed train, the U.S. Ambassador discussed Turkey-U.S. relations and noted that the policy of maintaining strategic close relations between the two nations is still valid.

During the discussion on bilateral relations U.S. Ambassador Ricciardone stated the following:

OUR RELATIONS ARE PROGRESSING FASTER THAN A TRAIN: (In response to the question of whether diplomatic relations between Turkey and the U.S. were as fast as this train.) "They are much, much faster," said Ricciardone, adding, "and that is how it should be."

OUR PARTNERSHIP WILL BE STRENGTHENED: (In response to a question of whether a change in relations is expected to come from Kerry taking on the position of Secretary of State.) "This route was clearly established during Obama's first term. Obama reached a consensus with both President Gül and Prime Minister Erdoğan to further expand relations. During the Cold War era and afterwards we were focused on joint security and defense. This is still of crucial importance, however we have wanted to expand our relations especially in terms of trade and investments. No matter how divergent our geographical and economic perspectives may be, when it comes to issues such as Iraq and Iran we do have similar strategic interests. The Israel-Palestine issue is an example. The Turkish-American partnership will only continue to grow stronger from here on out."

OBAMA-ERDOĞAN MEETING: "I am confident this meeting will take place. Secretary of State John Kerry has clearly expressed his favor for Obama's impending visit. We want this trip to transpire at the right time and in the right atmosphere and in as short a time as possible. Because, we not only strongly believe in Turkey's contribution to peace and prosperity in the region, we also believe Turkey plays an important role in the further development of our bilateral relations. We place extreme importance on our friendship with and respect for Prime Minister Erdoğan."

U.S. EMBASSY ATTACK: "This attack has brought us even closer. Turkey is exerting strong efforts to ensure our Western European allies bring the DHKP-C to justice. We are working together on this matter. We are increasing the exchange of information. In order to bring these people to justice in courts in Holland, Belgium and Greece as well as in Turkish and American courts, however we need to not only be exchanging information but also need to be sharing evidence."

ATHEIST FANATICS: "The Soviet Union is no longer and Russia is now a trade partner and friend for all of us, albeit closer to some and more distant from others. NATO is now focused on issues of national security. The fight against terrorism, violence and fanaticism is a general issue. When I mention fanatics, I am not just referring to religious fanaticism. The DHKP-C, (the far-left Revolutionary People's Liberation Party which was responsible for the Feb. 2nd attack on the U.S. Embassy in Ankara) for example, are atheist fanatics. We are working on dealing with these sorts of issues together."