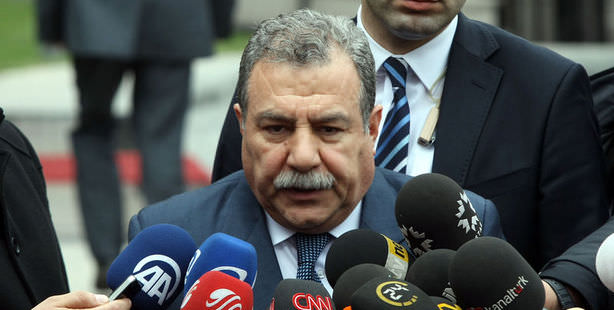 Five suspects, four of which are Syrian nationals, have been apprehended and referred to the court for their arrest in connection to the bombing at the Cilvegözü border gate with Syria which killed 17.

Announcing that security forces have detained the two individuals directly responsible for the blast, which took place at a buffer zone between the Turkish Cilvegözü border gate in Hatay and Syria's Bab al-Hawa post on February 11th, resulting in 17 deaths, Interior Minister Güler stated, "We have confirmed that the attack was directly connected to the Syrian intelligence organization.

Interior Minister Muammer Güler announced that five suspects, including a women and a man who were caught on footage actually arriving to the scene in the bomb-laden vehicle prior to its explosion as well as another individual thought to be the orchestrator of the heinous attack have been apprehended in an operation staged by security forces and will be referred to the court for their arrest today.

Güler said, "We originally arrested an additional five suspects for aiding and abetting, bringing the total number of suspects detained up to eight, five of which were Syrian nationals. Three of those detained were subsequently released by the prosecution. Today, five of the remaining suspects, four of which are Syrian citizens and one Turkish national, will be referred to the courts for their arrest. Two of the individuals were seen arriving to the scene of the blast in the vehicle which later exploded. Another individual is said to be responsible for orchestrating the attack. One other suspect is still being sought by police for their alleged connection to the attack."

Speaking to members of the press, Güler stated the following: "We have information on who instigated and organized the attack." When asked if there was any connection to the Syrian intelligence agency, Güler told reporters, "Yes, we have confirmed leads that show the suspects were in communication with both Syrian intelligence as well as military officials. They had also made certain preparations in the past, however never found the opportunity to go ahead due to the intensified security measures. Five out of the eight individuals apprehended are being referred to a court in Adana today for a request for their arrest for attempting to disrupt the nation's unity and integrity, for designing and detonating a bomb which killed 17 people and for being in possession of explosives," stated Güler.

Deputy Prime Minister Bülent Arınç says the suspects connected to the bombing were apprehended in an operation by security forces that could have been a subject for a film. "Through intelligence-gathering we were able to identify three individuals for their involvement in the attack. The operation began on March 7th and the individual who organized the attack and the two suspects who were seen driving the bomb-laden vehicle to the scene of the blast were apprehended," said Arınç.

This is a translation of an article originally written by Nazan Erdem and Yaser Çaparoğlu.