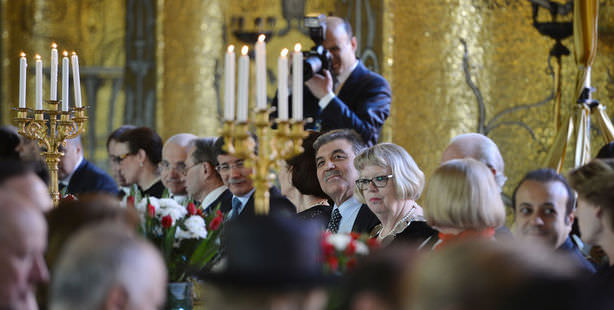 While on an official trip to Sweden, President Gül met with Swedish Prime Minister Reinfeldt on Tuesday and the two nations’ foreign ministers signed a ‘Strategic Partnership Agreement’.

On the second day of President Abdullah Gül's trip to Sweden as a special guest of Swedish King Carl XVI Gustaf, he had the opportunity to meet with his Swedish counterpart Fredrik Reinfeldt. While the two nations' foreign ministers signed a strategic partnership agreement, the Swedish side emphasized their staunch support for Turkey's EU membership. After attending a bilateral meeting at the Swedish government headquarters Rosenbad in Stockholm, President Gül and Swedish Prime Minister Reinfeldt went on to hold a joint press conference.

The "Turkey-Sweden Strategic Partnership Document" signed by Turkish Foreign Minister Ahmet Davutoğlu and Swedish Foreign Minister Carl Bildt prior to the news conference, underlines the significance of cooperation between Sweden and Turkey as two active players in the global arena. The document, which deals with determining shared areas of interest and further developing cooperation between the two nations, also foresees deepening their lasting and long-established ties.

President Gül and his wife First Lady Hayrünnisa Gül attended a lunch held in their honor by the Stockholm City Council. The lunch was held in the 'Golden Hall' (Gyllene Salen) which is adorned with mosaics containing motifs from Swedish history. It was learned that nearly ten kilograms of gold were used in the wall adornments.

The Gül couple was joined by Swedish King Carl XVI Gustaf and his spouse Queen Silvia on a tour of The National Museum of Science and Technology, which was founded by the Royal Swedish Academy of Engineering Sciences. Later, President Gül and First Lady Hayrunnisa Gül attended an inauguration of the Stockholm University's Institute for Turkish Studies.

CONCIERTO BY THE PEKINEL SISTERS

Swedish King Carl XVI Gustaf and Queen Silvia hosted a dinner in honor of President Gül and First Lady Hayrunnisa Gül at the Royal Palace in Stockholm Tuesday evening. Prior to the reception, internationally-acclaimed Turkish pianists, the Güher and Süher Pekinel sisters, played a recital. A number of ministers, parliamentarians and businessmen attended the reception held by Swedish King for President Gül.