President Gül: “We will have rising legal and democratic standards” 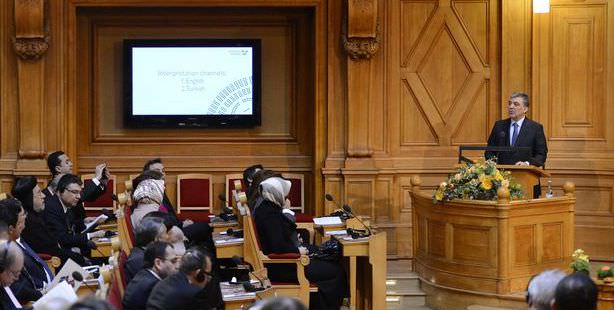 During an official trip to Sweden, President Gül delivered an address to the Swedish Parliament in which he discussed the ongoing peace initiative to put an end to terrorism in Turkey, minority communities and Turkey’s EU bid.

President Abdullah Gül delivered an address to the Swedish Parliament on Wednesday in which he discussed Turkey's EU bid, minority communities and the ongoing peace initiative with the PKK after which he responded to questions from members of the Swedish parliament.

President Gül responded to a question on minority rights posed by Yılmaz Kerimo, a Swedish parliamentarian of Turkish heritage, by stating, "You all are distanced here. Sometimes the reality can be much different than the images projected. If you come and go then everyone will be able to see what the reality is in Turkey."

Gül went on to relay the following messages during his address and subsequent question and response session at the Swedish parliament:

Turkey has been undergoing a series of deep-rooted reforms. We are continuously raising our democratic, legal and human rights standards. What used to be perceived as taboo and prohibited are now an inclusive part of our nation today.

You said the Mor Gabriel church was being occupied. There is an ongoing case regarding whether certain areas of land in its surroundings belong to the church itself or the treasury. The church is open. If you were to say the church was closed you would be giving out the wrong message."

(On Turkey's EU membership) "We need to revitalize the negotiations process. For Europe to distance itself from Turkey at a time when democracy is expanding through the Middle East and North Africa and the global economy's center of gravity has been shifting towards Asia would be a strategic myopia. I find the open and transparent debate in the context of a 'multi-speed EU' to be very appropriate," said Gül in reference to the term used to describe a method of differentiated integration based on an individual country's political situation.

(On the solution process) "If there wasn't terrorism or violence our democratic standards would reach an extremely high level and we could have solved the Kurdish issue, however when there is terrorism and violence whether we like it or not, we have to implement our security policies.

What we are hoping to achieve at the end of this process is for weapons to be completely relinquished and for Turkey's legal and democratic standards to rise. I believe that through this process all of the issues raised by our Kurdish citizens will have been solved.

Öcalan was tried and sentenced by the court. He is now serving his time. He is being granted all of the rights that are given to convicts. He has no medical issues nor is he isolated from society. He is able to read books, newspapers and television. He will continue to serve out his conviction," stated Gül.