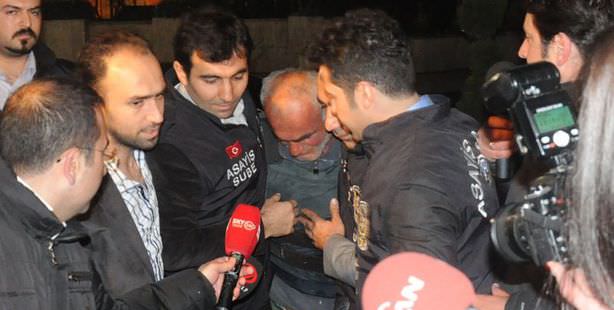 Ziya Tasalı, the prime suspect in the murder of 33-year-old American tourist Sarai Sierra, has been apprehended in Latakia, Syria. In his defense, Tasalı says he was under the influence of narcotics and didn’t realize he had killed the mother of two until the following day.

When Turkish security forces acquired information that 'Ziya Tasalı', aka 'Laz Ziya', the prime suspect wanted for murdering Sarai Sierra, a 33-year-old American tourist whose body was found amongst ruins of the city's ancient walls in Istanbul's Cankurtaran district, was heading for Syria, the Hatay Police Department set up a special team to track the perpetrator down.

Police received information on Friday that the suspect was sighted in Latakia, Syria, upon which a preliminary team of security and intelligence officers were sent to the region from Hatay. The team located Tasalı at a hostel in Latakia inhabited by several Turks. The team followed the suspect for a few hours in order to ensure the operation for his arrest was a success. Every move the suspected murderer took was tracked and recorded.

ASSAILANT WAS RETURNED TO TURKEY YESTERDAY

The Turkish security and intelligence team observed that the suspect resided alone and did not engage in dialogue with many others. The Hatay Police Department pressed the start button for an operation staged by a ten-member team of public security police officers, intelligence agents and Special Forces, which headed for Syria. With the assistance of Syrian opposition forces, the special security team from Turkey arrested the prime suspect in Sarai's murder at five a.m. Sunday morning. Yesterday at 12:30, Tasalı was brought into Turkey through the Cilvegözü Border Gate located in Hatay's Reyhanlı district. Interior Minister Muammer Güler announced yesterday that Tasalı was apprehended as he crossed into the Turkish border.

Tasalı confessed to the murder in his response to the first question posed by police. Tasalı recalled what happened by saying, "I was on drugs that day. She was rude to me and was giving me a hard time so I hit her in the head with a stick. I don't remember anything else. I only realized that I had killed her the next morning when I woke up and the effects of the drugs were wearing off and I saw the blood I was covered in. I covered the body to try to hide it. I remained in Cankurtaran for awhile. When the press began writing about her going missing, I went to Karabük. I later crossed into Syria from Hatay with the help of a friend." Tasalı, who was dressed in fatigues and boots, was noticeably relaxed as he was taken to the Antakya State Hospital to undergo a medical check-up.

Sarai Sierra, a young American mother of two who arrived to Turkey on January 8th on a photography trip, went missing on January 21st. On February 2nd, police found Sierra's body hidden amongst the ruins of the city's ancient wall. Her head had been bashed in with a blunt object which was the cause of her death. Police immediately began searching for Ziya Tasalı. DNA samples acquired from his family were consistent with tissue found underneath Siera's nails. After the murder, Tasalı first headed to Karabük from where he is stated to have taken a bus to Hatay.

Last night at approximately 20:50, Ziya Tasalı arrived in Istanbul on a Turkish Airlines commercial flight, after which he was taken to the Istanbul Public Security Branch Office. Istanbul Police Department Chief Hüseyin Çapkın issued an announcement thanking both Istanbul and Hatay police. "This was a difficult and long-winded effort. it was an international incident. Istanbul is a big metropolis, things happen, however Istanbul police will follow through until the end," stated Çapkın.

This is a translation of an article originally written by Yaser Çaparoğlu, Alper Sancar and Emir Somer.