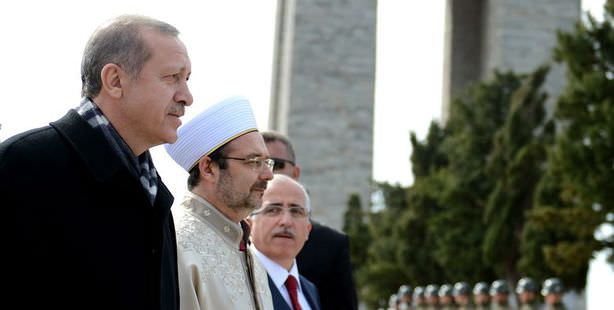 Referring to the Battle of Çanakkale as a legend which tells the story of unity and brotherhood, Prime Minister Erdoğan said, "Those who do not understand this spirit will never understand this nation. We will preserve this brotherhood. The borders of our understanding of nation were drawn up in Çanakkale.”

March 18 Martyrs Day and the 98th anniversary of the Dardanelles Naval Victory, which set a precedent to the Battle of Çanakkale or the Gallipoli Campaign, were celebrated yesterday with a series of ceremonies attended by Prime Minister Recep Tayyip Erdoğan. The first ceremony of the day was held Monday morning at the Çanakkale March 18 Stadium. During an address at the ceremony, Erdoğan said that the soldiers that gave their blood and lives in Çanakkale have written a great legend that can never be erased from history. "The Çanakkale Victory was not the victory of a single ethnic background, race or nation. The Çanakkale Victory is just as much a victory for Turkey's Anatolia and Thrace as it is for all sister nations and brethren societies of the world. This great victory was celebrated in Diyarbakır just as much as it was celebrated in Istanbul. The pride felt for this heroism in Izmir was felt just as much in Beirut, Baghdad and Damascus."

A LEGEND THAT TELLS THE STORY OF BROTHERHOOD: "Çanakkale has become a wonderful legend that tells us the story time and time again of how we were unified and brothers. The borders of our understanding of nation and nationalism were drawn up in Çanakkale. We found our concept of nationalism in the spirit, soul and roots of Çanakkale. Our martyrdom is our national identity. It is our identification card. While the legend that would change the course of history as well as direct it was being written, a manifesto of our understanding of nation and nationalism was also being composed," said Erdoğan.

ONE NATION, ONE FLAG AND ONE CITIZEN: Pointing out that the graves in the cemetery in Çanakkale were inhabited by soldiers from all over the country, Erdoğan said; "Those who do not understand the spirit of Çanakkale will be unable to comprehend the concept of nation and nationalism. Those who do not understand the determination for solidarity and self-sacrifice in Çanakkale will never understand the brotherhood in our nation. We were veritably reborn as a nation on March 18, 1915. We will learn a lesson from Çanakkale and our martyrs here and will elevate our sense of brotherhood to an even further level. Hopefully, we will preserve this brotherhood for all of eternity and will head towards the future in unity, protecting what has been entrusted to us. Therefore we say one nation, one flag and one citizen. We will be heading into the future together," said Erdoğan.

'THERE WILL BE NO HARM DONE TO OUR GLORIOUS MEMORIES'

Erdoğan also attended a meal held with relatives of martyrs and veterans as well as NGO representatives and later delivered a speech at the Çanakkale Martyrs' Memorial where he reiterated that they would continue to ensure that this nation remains unified. "Just like the soldiers who fought in this battle, we will also use our chests as shields against any attempts to harm their glorious memory. We will continue to preserve the sense of brotherhood, which they wrote out with their blood, in the strongest manner and will carry it with us into the future," stated Erdoğan.

After watching a performance by Solo Türk, the Turkish Air Force aerobatics team which uses fighter jet F-16's for their demonstration, Prime Minister Erdoğan also addressed the public in front of the Eceabat Municipality, during which he stated, "I am expecting your support during this solution process. We will be one and unified, strong and lively and we will solve this issue."