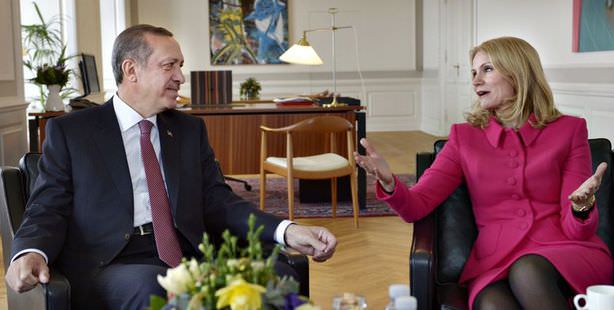 Danish Prime Minister vows to adopt legislation that will allow for the closure of Roj TV, while both nations commit to increase trade volume.

During an official trip to Denmark, Prime Minister Recep Tayyip Erdoğan met with both Danish Queen Margrethe and Prime Minister Helle Thorning Schmidt. The most important topic on the agenda during a one-on-one meeting with Schmidt was Erdoğan's condemnation of the fact that despite the known connection to the PKK terrorist organization, Roj TV is still allowed to operate in Denmark. His Danish counterpart pledged to work on new legislation in the Assembly in the next few months, which will allow for the closure of the controversial television station.

During the meeting, Erdoğan pointed out that the two nations' relations span back 250 years to a friendship and trade agreement signed by Sultan Osman II and King Fredrich V in 1756. However, he states, "Our joint trade volume is not where we would like it to be." Prime Minister Erdoğan went on to express that as of 2012, the current joint trade volume was 1.7 billion dollars. "We aim to increase bilateral trade volume with Denmark up to five billion dollars by 2015," said Erdoğan.