Diyarbakır is ready for this new solution period 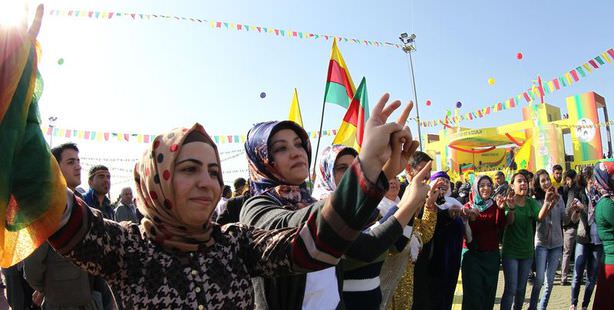 Diyarbakır is preparing to host a historical celebration for Nevruz this year… With two million people expected to take part in this historical day, for the first time ever, the Kurdish opposition Peace and Democracy Party (BDP) and security forces will be working together. Diyarbakır governor Toprak says, “Let brotherhood prevail at this year’s Nevruz”

Diyarbakır is ready to stage a historical celebration for Nevruz, the March 21st Kurdish New Year. With a higher participation than ever anticipated for Thursday's celebrations, capacity for the protocol platforms have been increased. Due to the intense interest shown by foreign and national press, 500 hundred journalists and reporters have been accredited to cover the event. Precautionary measures have been taken and 150 private personnel have been assigned to ensure the security for a specially designated area for the press.

THE POLICE DEPARTMENT AND BDP WORK TOGETHER FOR A FIRST

While approximately two million people are expected to gather in the city's Nevruz Park, 5,000 BDP members have been assigned to ensure the day's events go smoothly. As of six a.m. this morning, buses departed from 85 different points throughout the city to transport those wanting to attend the festivities. In addition, as has been done in past years, hundreds of thousands are expected to walk to the grounds hosting the festivities. The Police Department, intelligence units and BDP members will be working together to coordinate the event for the first time ever.

I had the opportunity to meet with the Governor of Diyarbakır and the District Police Chief yesterday. Governor Mustafa Toprak delivered the message that we should 'roar with feelings of brotherhood' and said, "Nevruz, which literally means 'new day', is a holiday that celebrates the awakening of nature that is celebrated throughout a wide geography. The day also has an extremely rooted presence in the Anatolian culture. Nevruz, which is not a holiday that is celebrated by any particular religion, sect or ethnic group, is a day that shows us how diversities can live altogether in harmony. I hope that this Nevruz Holiday will be joyously celebrated in peace, safety and health and I want to congratulate our citizens' holiday with my sincere regards," said Toprak.

Police Chief Recep Güven said that every precautionary measure was in place and that reinforcement has been brought in to the city to ensure the highest level of security. Güven also congratulated citizens on this Nevruz Holiday.

The historical celebrations at this year's Nevruz will include the reading in both Kurdish and Turkish of a message penned by Abdullah Öcalan, the imprisoned leader of the PKK terrorist organization. As a result, this year's Nevruz has drawn intense international interest and a wide number of participants have flown in from abroad. Nearly 500 people were employed to organize the 136 square meter area of Nevruz Park where the celebrations are being held. There will be a series of vendors set up in a designated area outside of the park. For the first time ever, the Metropolitan Municipality and other district municipalities and related institutions have hung up banners and billboards throughout the city celebrating Nevruz in Kurdish.

This is a translation of an article originally written by Savaş Ay.