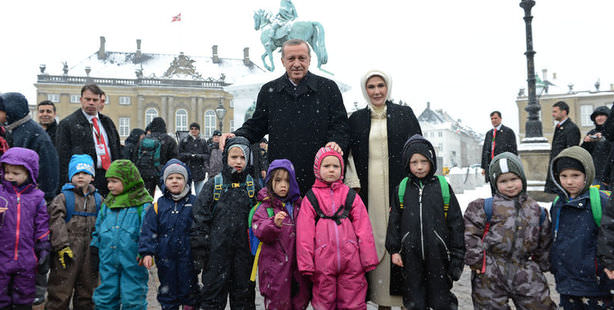 Speaking from Denmark, Prime Minister Erdoğan insinuated a connection between the Ergenekon organization and the two terrorist attacks staged in Ankara on Tuesday: “Whenever Turkey has entered a healthy period of progress; these sorts of formations have always surfaced.”

Prime Minister Tayyip Erdoğan commented on the terrorist attacks on the AK Party Headquarters and the Ministry of Justice on Tuesday for reporters in Denmark, while on an official trip to Denmark and Holland. Although the ultra-left outlawed Revolutionary People's Liberation Front (DHKP-C) has claimed responsibility for the attack, Prime Minister Erdoğan pointed deeper influences by stating, "There is a different aspect to these incidents involving their connection to Ergenekon. We have experienced similar instances in the past," said Erdoğan.

The Prime Minister was referring to the "Ergenekon terrorist group" an alleged underground network of secular arch-nationalists that is accused of being at the heart of political violence, extra-judicial killings and bomb attacks which scarred Turkey in recent decades - an embodiment of anti-democratic forces which Erdoğan says he has fought to stamp out.

Erdoğan went on to deliver the following messages during the news conference held in Denmark Wednesday:

AN ATTACK ON DEMOCRACY: "The weapons and materials used in the attack on our party headquarters were recovered at the site. There are finger prints and footage which has allowed the perpetrators to be identified. Those responsible for the attack on the Ministry of Justice have also been identified. I believe that the assailants of both attacks will be apprehended soon. This attack was an attack on democracy."

DEEP TIES: "There is a different aspect to these incidents involving their connection to Ergenekon. We have experienced similar instances in the past. Whenever Turkey has entered a healthy period of progress; these sorts of deep state formations, such as Ergenekon have surfaced and attacks such as these have transpired."

THIS IS A DIFFERENT TURKEY: "This is now a different Turkey. This is a Turkey that is trying to engage a solution process. There is also a terrorist organization trying to provoke and obstruct the solution process. We will not give them an inch. Standing back, taking a step back or delaying the process is not possible. We are determined to continue on our path. There is a strong will for a solution at present."

THE ERGENEKON TRIAL: "The Ergenekon trial is not over. This trial is an ongoing process. The final opinion has been released. From here on after the court will make a ruling. This is not the only incident of its kind nor is it the last. There is a past. When we came on, we had to deal with issues such as the Susurluk incident. This was a similar such incident. We need to evaluate the incident based on its anatomy. We know that there have been similar incidents in the past."

'May Nevruz not be overshadowed'

"No one should cast a shadow over Nevruz. We will celebrate what the spring teaches us with its flowers and what the soil teaches us with the resurrection of its soil all together with love, peace and freedom. May there be love, respect and smiling eyes and no bloodshed or tears. This Nevruz should be celebrated. There should be celebrations, festivities and fun. No one should overshadow this. There is peace in my country and not war.