PM Erdoğan: Until Israel recognizes Palestine I will continue to criticize the situation 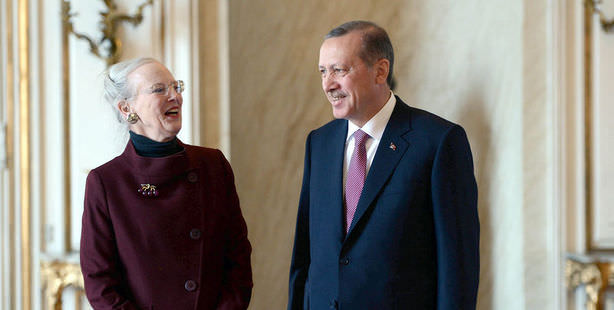 In an interview with the Danish Politiken newspaper, Prime Minister Erdoğan said he stands behind his remarks on Zionism and that they shouldn’t be misconstrued, they were directed at Israel’s policies of expansion in occupied territories. Erdoğan also said he would continue to criticize the situation until Israel recognizes the state of Palestine.

In an interview with the Danish Politiken daily, Prime Minister Tayyip Erdoğan commented on the reaction of a statement he made likening Zionism to crimes against humanity during an Alliance of Civilizations meeting in Vienna. "I understand that my statement in Vienna led to some debate. But no one should misunderstand what I said. Everyone should know that my criticisms on certain issues, especially Gaza and the settlements, are directed at Israeli policies. And it's entirely natural for us to continue to criticize Israel, as long as it will not give up its approach of denying the Palestinian state the right to exist. On the other hand, we have recognized and continue to recognize the Israeli State, within the framework of the 1967 borders and on the basis of the two-state solution," said Erdoğan.

Explaining his controversial comment for the first time, Erdoğan emphasized that his stance against anti-semitism should be well acknowledged from addresses made in the past and said that this particular comment was targeting Israel's policies and Gaza and not the nation's right to exist.

"One should not forget the fact that in the past we have hosted many Israeli Presidents and Prime Ministers in Turkey to reach peace towards a two-state solution. Today as in the past, Turkey supports all international and regional efforts to find a just, lasting, and comprehensive resolution of the Israel-Palestine conflict on the basis of the two-state vision. My several statements openly condemning anti-Semitism clearly display my position on this issue. In this context, I stand behind my remarks in Vienna," Erdoğan told Politiken.

When asked what he thinks will happen if there is no breakthrough in the peace process, Erdoğan replied by stating, "The current stalemate in the peace process is not sustainable. It leads to instability in the region and beyond. The Israeli attack on the Gaza Strip on the 14th of November caused the death and injury of many innocent Palestinians and created new chaos in the region.

These recent events have proven that there is no substitute for peace and that such escalation is inevitable until true peace is established, Israel's occupation of Palestinians territories comes to an end and an independent Palestinian State with East Jerusalem as its capital is established. It is necessary to immediately revitalize the peace process which is constantly delayed based on one pretext or other. As Turkey, we will continue to support efforts for restarting the peace process. Lastly, we cannot ignore the fact that Muslims under the age of 50 are not allowed to enter the al-Aqsa Mosque.

Erdoğan was also asked how long he thought Assad could remain in power, to which the Prime Minister responded, "This will depend on the developments that will take place. However, one thing is clear: the Assad regime does not exist morally, legally and politically. That they resort to terrorism and violence to maintain their de facto existence is a clear indication of this fact. Our assessment is further strengthened by the fact that the opposition is better unified within a more inclusive structure and has made progress in becoming a reliable alternative to the Assad regime.

The humanitarian and conscientious duty of the international community is to stand with the Syrian people in their justified resistance. It is necessary to support the transition to a pluralistic political system based on constitutional equality and democracy in Syria.

In response to a remark that Iran is offering support to Assad, and the U.S. to the opposition, Erdoğan told the daily, "Assad has blood on his hands; his regime is on its last legs and has lost all legitimacy. Supporting such a regime cannot be reconciled with political responsibility on any moral ground."

When asked how many years it may take for Turkey to become an EU member, Erdoğan said, "We would like to see Turkey as an EU member in the shortest time possible. The fact that Turkey's membership process has already taken 50 years is a clear indication of the delay… If there is political will in the EU, then our country is in a position to rapidly open chapters on economy, monetary policy, education, culture and energy as well as all others for negotiation. In our estimation, it is possible to technically open 10 chapters in 12 months and 15 chapters in 18 months."