Erdoğan offers assurance: Those who withdraw will not be executed 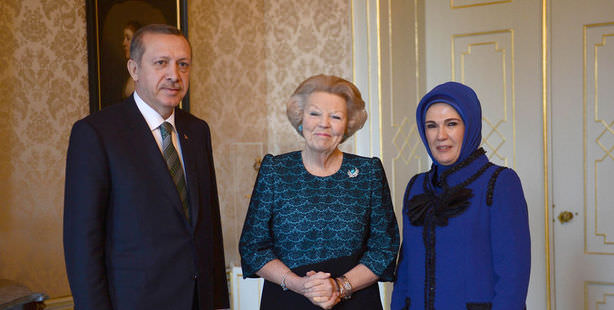 Recalling the executions which transpired while the PKK tried to withdraw in the past, Prime Minister Erdoğan said, “We will not allow for these sorts of executions to happen.” Erdoğan says that they plan to ensure the withdrawal of 1,400-1,500 PKK members this year.

Prime Minister Recep Tayyip Erdoğan commented on a number of the most pressing issues on Turkey's agenda in a special late-night question and answer session with reporters in his hotel where he will be staying in Amsterdam.

* In the past, there has been talk of the PKK leadership cadre being sent to Scandinavian countries. Is this something you discussed while you were in Denmark?

"No, this issue was not broached. "

* BDP and Kurdish sources seem to be constantly referring to the "Assembly". What are their demands?

"There is nothing the Assembly can do at the moment. They have no leverage during this withdrawal process; it is the government which is overseeing the process. And the government will do whatever needs to be done. We are paying extremely care to ensure the process is conducted within a legal framework. The moment the Habur withdrawal incident turned into a show, was the moment the withdrawal process came to an end. We will not allow for this to be repeated. Right now, we are engaged in an extremely different process. As you know, in the past when the PKK tried to withdraw, there were executions. However, we as the government do not think that way. We will not inspire nor allow for such executions to take place. We want this process to take shape in a manner that it will only contribute to peace in this country."

* As for the withdrawal of the PKK from Turkey's borders, are you directing them to go to any specific country, such as Iraq or Syria?

"That is something that they need to decide. They can go wherever they want."

* Will there be a buffer zone set up in order to prevent any attempts at sabotaging this withdrawal process?

"Sabotage could come from amongst themselves or other countries. Therefore, the BDP is requesting a commission be formed to deal with this matter."

* By including the Assembly in this process, they are trying to elevate the PKK's status in order to grant them legitimacy.

"They are trying to gain legitimacy for the organization, however that will not happen."

* There is a bit of confusion amongst the public. What exactly do you mean by the PKK "dropping its weapons"?

"For those terrorists who have not been involved in violent acts, just going up to the mountains does not constitute a crime. They will be able to enter any door and to face prosecutors. In other words, we are saying that those who have not committed criminal acts should return to their families. We do not want any armed activities to take place within our borders."

* In the past, it has been discussed that those in Kandil, who had not committed any crimes, could come to Mahmur and from there they could enter Turkey. Is this also a possibility now?

"The situation in Mahmur has a little bit to do with the United Nations. Of course the Northern Iraq administration also needs to be involved. However, Mahmur is not an absolute part of this process. Our number one priority is ensuring the withdrawal of those within the borders. They say they are around 1,400 to 1,500 in numbers."

* It is being expressed that the expectation is for this process to be completed by the end of 2013. Is that the goal?

"That is our goal. This would ensure that 2014 is a healthy election year. It would also be to BDP's benefit."

* The Colombian government is planning on finalizing their process with FARC within the year. Are there any parallels?

"Our ongoing process has no connection to the process in Colombia. I have closely inspected the structures of the IRA and ETA as well as those in Sri Lanka and Colombia. None of them are comparable with our situation."

* Will there be a new delegation heading to İmralı to speak with Öcalan?

"If the conditions necessitate this then it could happen. If they make a request, we will consider it. It will be evaluated according to the coordination of this process."

* This time the solution process is being conducted as a national project. Western nations are not displaying a reaction…

"Who says they are not reacting… They are reacting; however they are not offering support. They are pushing Iraq into Iran's lap. They are in charge of the energy sources there. They want a regimented power to continue. They are doing a lot of things in the North and in the South. Just look at the latest statements Sadr made regarding Maliki. It is deep and rueful. Maliki delayed the local elections by six months. An autocratic structure is the issue here. They are using Talabani's absence. Just look at who they have replacing him. In the past, people like Hashimi and Adil Mehdi were given proxy to the president. The election results in Mosul and Anbar will be extremely significant."

THE ATTACK ON THE AK PARTY OFFICES

* Have you received the latest details on the attacks on the AK Party building and Ministry of Justice in Ankara?

"The technical aspects of the attack have been established. Our general headquarters was attacked with a LAW weapon."

* There are claims the LAW weapon came from Syria.

"I have not received any such information. The area struck was between my office and the beam of the room on the level just under. The window next to the meeting room was shattered. The assailant left behind the weapon and a bag. Certain materials belonging to the weapon have been recovered. Fingerprints have been found. There is also evidence on city surveillance footage. The MOBESE (city surveillance cameras) footage from the Ministry of Justice attack is extremely clear. The footage captured on the Prime Ministry security camera is also extremely clear. You can see that two hand grenades are thrown next to citizens on that crowded street. The hand grenades are Russian made… Thank goodness there wasn't extensive damage. However, the staff at the Ministry of Justice are civilians… We have established a physical description of the attacker. Due to the fact that the DHKP-C does not have a high number of militants they say, 'the process of apprehending the suspects might not take long."

* In Copenhagen, you stated that the attack was tied to Ergenekon…

"When you assess all Ergenekon-type activities, you can see there is a cohesion of events. From our party's point of view, to sabotage the solution process is an attack on national will. From the Ergenekon perspective, the attack on the Ministry of Justice could be connected. When you take a closer look, you see there are similar situations derived from the Susurluk incident. There is also a parallelism when you look at recent DHKP-C activities. In the latest operation, 170 people were arrested. Whether or not we like it, this provokes them. The DHKP-C are a subcontractor organization anyway. They fell into a gap after Dursun Karataş. Now, they are trying to recover and are seeking promotion."

* The prosecutor has issued his closing statement on Ergenekon. Life sentences were requested for 64 defendants. What do you think about this?

"My stance on the judicial process is clear. Both an indictment and closing statements have been released. There are a significant number of requests for life sentences. Another significant point here is the fact that sentences are being requested for attempting to stage a coup and not for membership of a terrorist organization. They are not charging them for being terrorists, however the sentencing is harsher. They are requesting a ruling that is being based on the state. The heavier sentences are being preferred."

* You had said that Başbuğ should be released pending trial. At this present point and in respect of the prosecutor's request, do you now feel it is right for him to be detained?

"It is not correct to comment on this right now. We need to wait until the judicial process is over."

Prime Minister Erdoğan also commented on the departure of columnist Hasan Cemal from Milliyet newspaper (following the paper's release of the minutes of a peace talk meeting with PKK leader Öcalan). "My friends, rumors sometimes surface in corners too. All I ever said was, 'Criticism will open our horizon, however don't insult.' For someone to say that I wanted Hasan Cemal to stop writing is greatly offensive to me. We did have an incident recently that was disappointing. Commenting on the release of the meeting's minutes in the press I said, 'To say that we are ready to offer any form of support in the fight against terrorism and to then go publish the minutes is inexplicable'

During the IRA era, the media made the joint decision to not publish these sorts of things. I reminded of this. I have absolutely nothing to do with the Hasan Cemal situation. In the past when columnists such as Uğur Dündar and Emin Çölaşan departed their newspapers similar rumors surfaced. However, I had nothing to do with that either. Meanwhile, the newspaper has also announced that Hasan Cemal will be able to write his column whenever he wants."

* When Milliyet released the details of the meeting, Bülent Arınç referred to it as "successful reporting"…

"If Mr. Bülent said anything like that then it was in error. At that time, the minutes of the meetings were offered to other newspapers to publish, however they refused."

"We cannot solely be associated with the regime in Syria. The opposition has selected a Prime Minister. The Arab League will be accepting this new government. This new opposition government will be operating inside in such places like Aleppo and Idlib. Russia will need to reevaluate the situation. Obama's trip to the Middle East is significant from this standpoint. In the region however, Kirkuk should have be given a special status."

This is a translation of an article originally written by Erdal Şafak.