Erbil is on board for withdrawal process 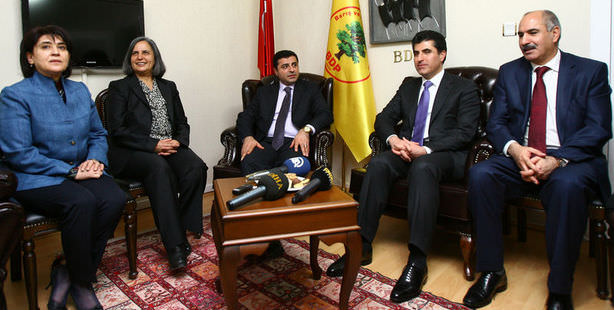 Erbil is prepared to take on an active role in the withdrawal and relinquishing of weapons process by the PKK terrorist organization as part of the ongoing peace initiative in Turkey.

As part of the ongoing negotiations between the Turkish state and the imprisoned leader of the PKK, Abdullah Öcalan, Barzani hosted a delegation from BDP, Turkey's Kurdish-affiliated opposition party, who arrived to Northern Iraq in order to present a letter from the terrorist organization leader to its factions in Kandil. The delegation that arrived from Turkey was accommodated in Barzani's home in Erbil as well as flown by his private jet to meet with the PKK leaders in Kandil.

Commenting on the ongoing solution process, Barzani stated yesterday in Ankara, "We support Öcalan's letter. We also want to commend Prime Minister Tayyip Erdoğan on the stance he has displayed. We will continue to support this ongoing process."

The meeting, which lasted approximately 40 minutes and was arranged by Leyla Zana, took place at the BDP General Headquarters in Ankara yesterday and was attended by BDP Co-chair Selahattin Demirtaş, Co-chair Gültan Kışanak, DTK (Democratic Society Congress) Co-chairs Ahmet Türk, Aysel Tuğluk, Diyarbakır Deputy Leyla Zana and Muş Deputy Sırrı Sakık. The discussion, which was closed to the press, focused on the withdrawal of PKK members who have committed criminal acts from Turkey's borders. Emphasis was placed on the concern of possible provocation and the importance of the Kurdish Administration's involvement in the process.

PRAISE FOR THE PRIME MINISTER

Upon his exit, Barzani posed for cameras with Demirtaş and said, "The stance exhibited by Prime Minister Recep Tayyip Erdoğan is praiseworthy." Explaining that he paid a visit to the BDP headquarters as a gesture for Nevruz, Barzani stated, "I also had the opportunity to express how pleased we are by the steps taken by Turkey to establish peace."

Demirtaş also commented by stating, "I believe that Barzani will contribute to ensuring that the process transpires soundly." Mentioning that this was Barzani's first visit to the party headquarters Zana stated, "Everyone is now meeting with Kurds and extending a hand. The Kurds need to know that it is now time that they extend a hand to one another."