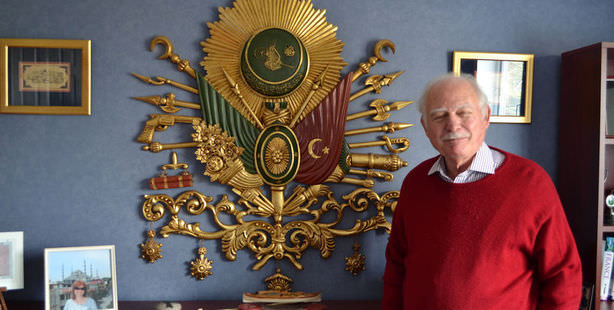 The last 77 members of the Ottoman dynasty, which are spread out throughout a wide geography spanning from the United States to Jordan, are now in communication with one another through a group formed on the popular social networking website Facebook.

Some were forced to get by through selling pages of gold-engraved Korans. Others were forced to sleep on the coast and to travel by coal trains. Then there were the ones who died before being able to scramble up the money for a ticket to return to their homeland when Turkey finally granted permission for the members of the Ottoman dynasty to return after being forced to spend 50 years in exile. The remaining members of the dynasty who were forced into exile following the downfall of the Ottoman Empire gathered for the first time ever in the London Embassy in February in an event hosted by Foreign Minister Ahmet Davutoğlu.

THEY TRAVELLED FROM COUNTRY TO COUNTRY: "My father, Ali Vasıb Efendi was born in the Çırağan Palace. He was a graduate of Galatasaray High School and was sent into exile at the age of 21. They first went to Budapest, Hungary where they stayed for six months. Then he and my grandfather settled in Nice, France where they lived for 11 years. My mother is the granddaughter of Sultan Mehmed V. They later went to Egypt, which became a central location for members of the Ottoman dynasty. I was born there during World War II."

DIFFICULT TIMES: "Those were difficult years. They had no profession. Turkey gave each one of the members of the dynasty a thousand lira. This money got them through a few months however they were forced to be in exile for 50 years. They didn't receive any support from Turkey."

BORROWING FROM THE DENTIST: "My grandfather Sir Selahattin would borrow money from his dentist. During the first decade there were a number of people who committed suicide due to poverty. Sultan Abdülhamid's son Prince Abdürrahim Hayri was one of them."

'WE WILL RETURN IN 3-5 YEARS': "During the initial years in exile, everyone thought they would say 'There is a revolution. Once it passes the Republic will be established and we will ask you to return in three to five years.' My family would constantly question, 'Will it be this year? Will we return next year?' Nobody conceived that it would be 50 years until we returned. However, no one ever acted against Turkey."

A PILOT PRINCE: "I went to school just like everybody else. I worked in the United States and in Canada as a finance manager. Another prince Ziyaeddin was a pilot, he retired three years ago."

FATİH TO BE PLAYED BY HIS 'GRANDSON': "They are filming a documentary on the life of Mehmed the Conquerer (Fatih Sultan Mehmet). Another prince named Orhan, the grandson of Sultan Abdul Hamid II, will be playing the role of Fatih in his later years. He lives in Turkey now."

HE WILL GROW UP A TURK

The son of the great-grandson of Sultan Mehmet V, Mahmut Namık Osmanoğlu, shared that he received Turkish citizenship last year. Osmanoğlu says his biggest regret is not being able to speak Turkish. Pointing out his son, Osmanoğlu said, "My son is Ziya. We will be hiring a nanny that can speak Turkish. He will be different than my father or myself. Ziya will grow up knowing that he is a Turk."

'I WISH WE COULD SPEAK TURKISH'

There are 77 remaining members of the Ottoman family. Twenty-five have the title of 'şehzade' (prince), 16 are referred to as 'sultan', 23 are called 'sultanzade' and 13 are called 'hanım sultan'. They live throughout a widespread geography spanning from America to England, Egypt and Jordan and they all speak different languages. Mediha Sultan's granddaughter Leila Beggin explains that they have set up a group on Facebook which has allowed them to be in contact with one another. Beggin lives in Oxford with her son Orhan and her husband Andrew. Her biggest regret is the fact that she doesn't know how to speak in Turkish.