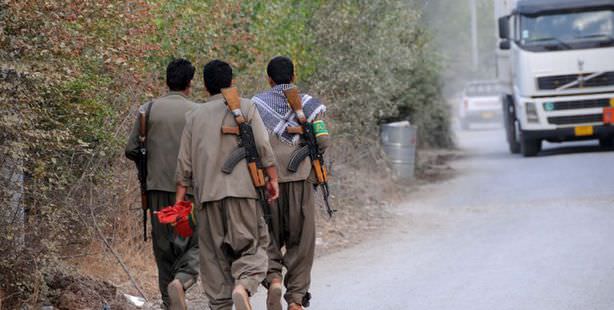 As part of the ongoing peace initiative for the PKK terrorist organization to lay down their weapons and withdraw their militants from Turkey’s borders, security forces are now being tasked with contacting the families of 618 PKK members who have ‘not participated in attacks’. Meanwhile, files are also being updated on those members who have been involved in illicit PKK activities.

Police and gendarmerie forces are now contacting the families of these designated members to have them convince their children to return home. If they do choose to return home, these members who have not been involved in militant activities will be able to return to their homes without being forced to face the judiciary. PKK terrorists who were involved in attacks however will be allowed to settle permanently in Northern Iraq. Those members with foreign citizenship will be sent to their countries of origin.

SABAH has acquired details on the ongoing efforts to disarm the PKK and have its militants withdraw from Turkey's borders. As part of the ongoing process, the Security General Directorate Counter Terrorism and Intelligence Departments have joined forces with the Gendarmerie Intelligence Command and the National Intelligence Organization and are now prioritizing the return home of 618 PKK members who have not been involved in criminal activities that are either currently staying in the camps in Northern Iraq or the organization's mountain wings located within the borders.

Security forces, whether it be police officers in the city or gendarmerie officers in rural areas, are going directly to the registered addresses of 618 PKK members whose files show they have not been involved in illicit acts, in order to request their families convince their children to return home. Security forces are explaining the ongoing process in detail to the families while also giving them the reassurance that their children will not have to face trial.

This ongoing campaign, launched under the slogan, "Don't be too late to return to your mother's and father's home. Hold on to the hand of compassion being extended to you," has already resulted in convincing a number of families to support the return of their children. The actual process of these designated members returning will begin after the organization's militant factions have withdrawn from Turkey's borders. When these members, who have not been involved in criminal acts, are finally able to return from the mountains and be rejoined with their families, the second stage of the PKK's disarmament will begin. The Ministry of Interior Affairs and the Justice Ministry have already requested the files for terrorists who have been involved in illegal acts.

All information collected on the PKK's internal structuring, activities, members and their length of involvements as well as their locations has been forwarded by the National Intelligence Organization (MİT) and the Police and Gendarmerie Intelligence units to the related ministries. Prosecutors have since been updating files on nearly 1,500 PKK members. The Northern Iraq formula has been established for the disarmament of terrorists involved in crimes. The PKK's administrative staff and militants will be transitioned to a permanent settlement in Northern Iraq. Once a consensus is reached with the Northern Iraq Regional Kurdish administration then the withdrawal process of the organization members in the mountains will proceed. PKK members of foreign citizenship will be sent to their countries of origin.