We must leave a good world to our children 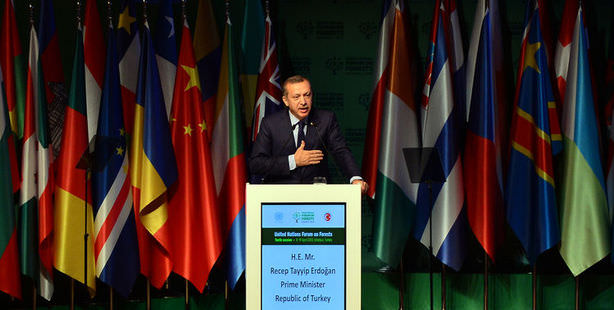 Speaking at the UN Forest Forum held in Istanbul Prime Minister Erdoğan called on the global conscience: “If this ruthless competition, ambition and greed continues in this manner, then we will no longer have a world left to leave to our children.”

Prime Minister Recep Tayyip Erdoğan delivered a lesson in humanity at the United Nations Tenth Forest Forum, hosted for the first time outside of the UN Headquarters.

Calling on the global conscience, Prime Minister Erdoğan said, "If the clothes we are wearing were sewn on the hopes of a five-year-old Bangladeshi child then we must question this at a deeper level in order to create solutions."

Istanbul is hosting the Tenth annual UN Forest Forum, considered to be one of the United Nations' most important events. The forum, which will run from April 8-19, began with an opening ceremony held yesterday and attended by Prime Minister Erdoğan. Also in attendance was the EU Forest Forum Chair Mario Ruales Carranza, Forestry and Water Works Minister Veysel Eroğlu as well as a high number of prime ministers and ministers from countries around the world. During his opening address, Erdoğan emphasized the global conscience in delivering the following messages:

"In order to satiate the people and make them business and bread owners we are witnessing the fast development of industrial zones, agricultural regions and urban areas. As a consequence of this fast growth our seas are becoming polluted, our streams and lakes are drying up, our forests are under threat and unfortunately our ecosystem is quickly disintegrating. What is even worse is that there are great divides developing in terms of opportunities between regions, nations, the public and even amongst individuals. We are living in an era in which a global conscience is needed the most.

We are not just physiological beings that carry a body and what sits on that body a head, which happens to hold a brain. We have a heart, a sole and we have conscience. If the clothes we are wearing was sewn on the hopes of a five-year-old Bangladeshi child, if the gasoline we put in our car has been mixed with the blood of the innocent in Libya, if the chocolate we give to our children has poisoned the rivers in Africa and if the coat we are wearing has caused the extinction of a species, if the furniture in our homes has pillaged the rain forest, then we absolutely have to be disturbed by this type of cycle, globalization and trade. We must question this all at a deeper level in order to create solutions.

If this period we refer to as growth and development continues, then the world may not survive. If this ruthless competition, ambition and greed continue in this manner, then we will no longer have a world left to leave to our children. There is a well known Native American proverb that I feel it would be beneficial to repeat here. 'When all of the trees have been cut down, when all of the animals have been hunted, when all of the water has been polluted and the air is no longer fit to breath, only then will you understand that we can't eat money," stated Erdoğan.

FORUM HELD IN A DIFFERENT CITY FOR THE FIRST TIME

For the past nine years the UN Forest Forum was held in the United Nation Headquarters in New York. This is the first year the UN Forest Forum is being held in a different city. The Istanbul Congress Valley, which is hosting the event, has been declared UN property with security conducted by UN police. After attending the forum, Prime Minister Erdoğan met with Omer Beriziky.