Turkey to set up special camp for Syrian Christians 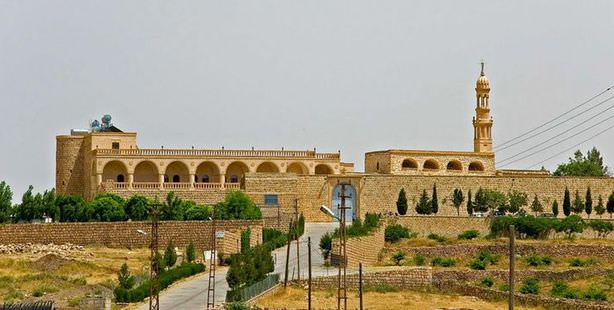 The Turkish government is now working on measures to provide special assistance for Syria’s Christian and Assyrian refugees. The first stage involves setting up two separate camps in Midyat, one located next to the Mor Abraham Monastery and the other on a treasury plot.

With the increasing number of Assyrian and Christian refugees seeking shelter in Turkey having escaped the pressure exerted by Bashar al-Assad's regime and the civil war in Syria, Ankara has decided to take measures to provide assistance directed towards minority groups.

The government is getting ready to take their first step towards offering directed assistance to Syria's various ethnic and religious minorities, especially Christians and Assyrians, by setting up two camps with a capacity to host 10,000. The first camp to be erected will be located right next to the Mor Abraham Monastery in Midyat and will host 4,000 Syrian Assyrians and Christians. A second camp, which will house 6,000 ethnic Syrian refugees, will be erected on property allocated by the treasury which is also in Midyat.

SABAH has acquired details on the Prime Ministry Disaster and Emergency Management Presidency (AFAD) and the Foreign Ministry's plan to provide humanitarian aid to Syria's ethnic and religious minority citizens. The government has had this 'B Plan' ready for awhile now, however the increase in the numbers of Assyrian and Christian Syrians that are especially choosing to enter Turkey coupled by the requests for assistance coming in from minority churches, has ignited the Turkish government to take action. This marks the first time a camp will be set up especially to accommodate Syria's minority groups, a majority of which are currently residing under difficult conditions in annexes in churches in Turkey. Turkey's Red Crescent will also be spearheading the supplying of basic humanitarian aid. According to sources, AFAD has designated a ten million lira budget for these camps.

According to the information obtained, priority will be focused on accommodating Christians and Assyrians from Syria. A 4,000-person capacity camp, which will solely accommodate these two minority groups, will be erected immediately adjacent to the Mor Abraham Monastery. This prime location will ensure that the Christian and Assyrian Syrians are both sheltered while also able to fulfill their religious duties. According to the information obtained, the second camp planned for Midyat will be set up on treasury land located just 30 to 40 meters distance from the Monastery. The 6,000-person capacity camp will host Syrian citizens of a variety of ethnic origins, including Kurds and Arabs that are currently facing difficult times.

This new move by the state marks the first time Turkey will be operating a systematic mechanism for providing aid geared directly towards Syria's ethnic and religious minorities. Up until now, the majority of Christians and Syrians that have fled their country for Turkey have been staying in either church annexes or with relatives. Turkey will be providing consistent aid to ensure these minorities exist according to humanitarian standards after most of them have lost all they own due to the prolonged civil war in Syria.

Mor Gabriel Monastery foundation Chairman Kuryakos Ergün says that they have applied to the government for the camp to be fitted with containers rather than tents. Explaining that a number of Assyrians and Christians have kept their identity hidden due to the fear that Bashar Assad's troops may do harm to their relatives, Ergün said, "They are mostly staying in Midyat and Istanbul. Once well-off in Syria, these communities now need serious assistance, which is something that is difficult for them to accept."