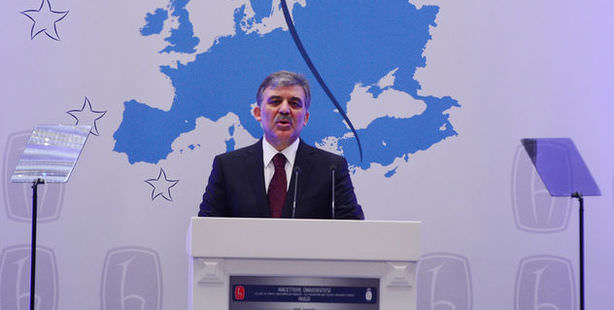 Addressing an audience at the opening session of a two-day symposium entitled "Migration, Islam and Multiculturalism in Europe,” President Abdullah Gül warned that racism and discrimination were the fundamental enemies of democracy and said “We must activate democracy’s reflexes of self-preservation in order to stave off racism.”

Speaking at the opening of a two-day symposium entitled "Migration, Islam and Multiculturalism in Europe" held in the capital, President Abdullah Gül pointed out that the nearly five million Turks residing in Europe are now becoming targets of racist motivated attacks. During his talk, Gül called on everyone who shares the same humane and democratic values-based conscious to stave off these forms of extremist tendencies.

Drawing attention to the fact that the economic crisis in Europe has resulted in the revival of certain racist acts, President Gül stated: "Racism, anti Islamism and zenophobia in relation to the economic crisis engulfing Europe has become a serious source of concern. The voting rates for parties that assert that migrants are the cause of unemployment, insecurity and poverty are on the rise. The governments that are taking measures against immigrants due to these fears are yet another cause for concern. Racism and intolerance are one of the most chronic diseases of Western society."

A high-technology command control surveillance device is now being used as part of President Gül's security. The device, which was first implemented at the symposium held in the capital, conducts surveillance through 18 different cameras. The mechanism also contains 14 high-resolution cameras as well as one with night vision capabilities and four cryptographic mobile cameras which take visuals in enclosed spaces. All of the visual images obtained from these cameras are received and inspected simultaneously by the Presidential Surveillance Department.